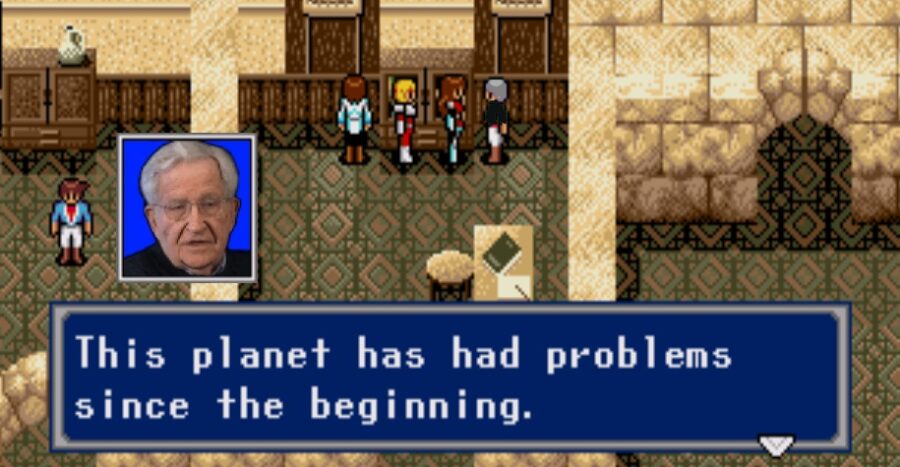 MOTAVIA — Renowned linguist and political activist Noam Chomsky has discovered that the people of “Phantasy Star IV” have demonstrated an equally disparaging reaction to his social commentary as those in real life, sources close to the 89-year-old confirmed today.

Chomsky decided to share his sentiments on the world of Motavia after noticing its resemblance to Earth and the challenges both planets face.

“I was unable to endure any further dismantling of Motavia at the hands of a despotic magician and his sinister overlords,” he said of Zio, the powerful spellcaster who has won favor among a growing segment of the population by means of violence and wild promises. “I simply couldn’t sit idly by as the ruling class continued to grease the cogs of its subversive mechanisms by arousing fear in the masses.”

“Although, just like at home, nobody seems to give a shit,” he added. Reports from Motavian citizens regarding the M.I.T. professor emeritus suggest that he has transitioned seamlessly into routines from reality, regularly penning scathing, well-researched calls to action to save the planet’s deteriorating environment and alter unsustainable practices among the people — all of which they patently disregard.

Chomsky has relied on the cooperation of the Motavia Academy to disseminate his message to the public, but a distrust of academia remains a substantial barrier.

A long-time advocate for democratic socialism, Chomsky emphasized that it must be the workers—the merchants, the innkeepers, the bounty hunters — who incite change. However, many members of the working class, including high-profile hunter Alys Brangwin, have spurned this message.

“Dear Lord, this guy is boring as fuck,” Brangwin said.