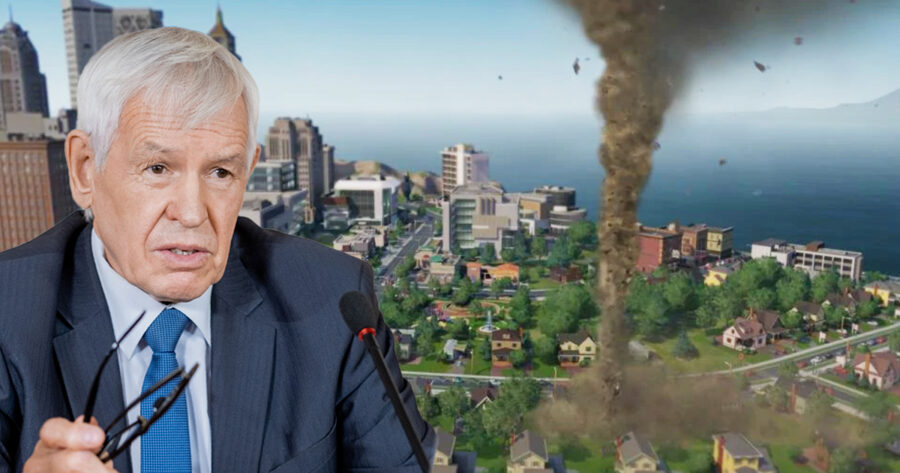 OW MY ASSVILLE — The mysterious new mayor, who no one remembers electing, has laid out a bold plan for 2022 which involves investing in the city’s infrastructure, broadening the industrial district, and somehow personally summoning a giant tornado expected to do lots of damage to the downtown area.

“I certainly have some issues with the plans the mayor has laid out today,” said a concerned citizen outside of City Hall shortly after the mayor’s speech commenced. “Now don’t get me wrong, we are definitely due for some of our roads and bridges being fixed, and you won’t catch me complaining about creating new factory jobs in the city, but a tornado? Really? Why not just build another zoo or a football stadium if you feel like spicing things up around here?”

The plan, outlined in a press conference held earlier today, calls for an F-4 level tornado to come and absolutely gut the shopping district of downtown Ow My Assville. While fatalities and destruction are sure to be caused, the mayor insists that the rebuilding efforts will create enough jobs to embolden the local economy for years to come.

“I guess that makes sense in some kind of twisted way,” said a second anonymous citizen. “But we could also just like try a UBI or something before pulling some weird X-Men shit. Just typical politician logic. They could address the public transit system around here if they really cared about us, but no, they’d rather summon a natural disaster that stirs us into a state of fear and hysteria. Why did I move to Ow My Assvile? I don’t even remember voting for this guy.”

As of press time, the mayor had donned a hard hat and was preparing to head downtown for a photo op as soon as the devastating twister had subsided.