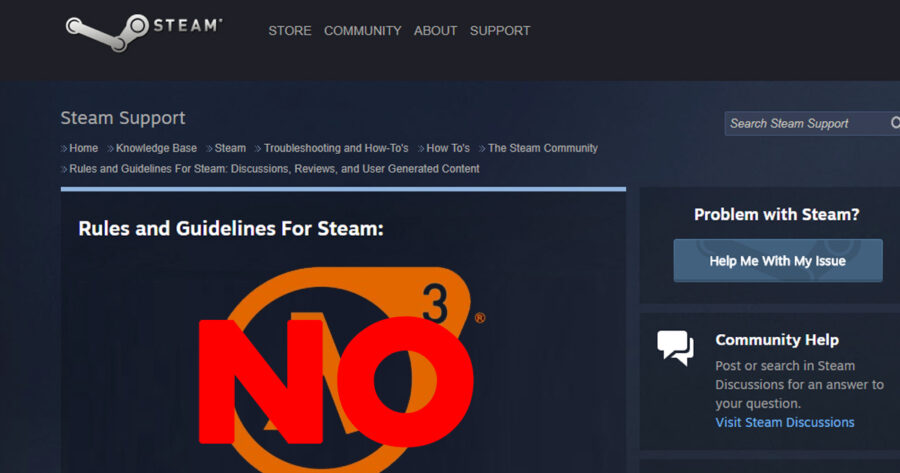 BELLEVUE, Wash. — In response to a number of controversial games being sold on their store, Valve has updated its guidelines for Steam, rescinding any kind of restriction of what games are sold on the platform as long as the game is not Half-Life 3.

“Look, we’re not insane. We realize that games like Green Eggs And Pain, a Cat in the Hat Torture Simulator, probably pushes the bounds of conventional good taste,” said an anonymous Valve employee. “But we believe in the right of consumers to decide for themselves what games to support with their money, as long as that game is not Half-Life 3 because that will never be sold on Steam.”

Several Valve employees echoed similar sentiments, claiming that resources across the company are simply stretched too thin to actively regulate what games are sold on the store.

“In between not working on a new Portal, not working on a new Left 4 Dead, not working on a new Counter Strike, and having spent over half a decade refusing to develop any new Dota franchise entries, content screening can often become an afterthought for time-strapped workers,” wrote Valve employee Erik Johnson in a lengthy blog post. “We just aren’t capable of determining whether games like Here Are A Bunch Of Guns: Now Go Kill Some Kids or The Last Jedi But With Just White Guys: A Telltale Game Series: will upset parents or cause long-term psychiatric issues with younger gamers.”

But even though the challenges can become taxing for Valve, the company remains dedicated to doing their job effectively.

“It’s our responsibility as a publisher to protect our consumers as much as entertain them, and we take that role seriously,” admitted Newell. “Half-Life 3 just happens to be literally the only game we can even imagine crossing that line.”