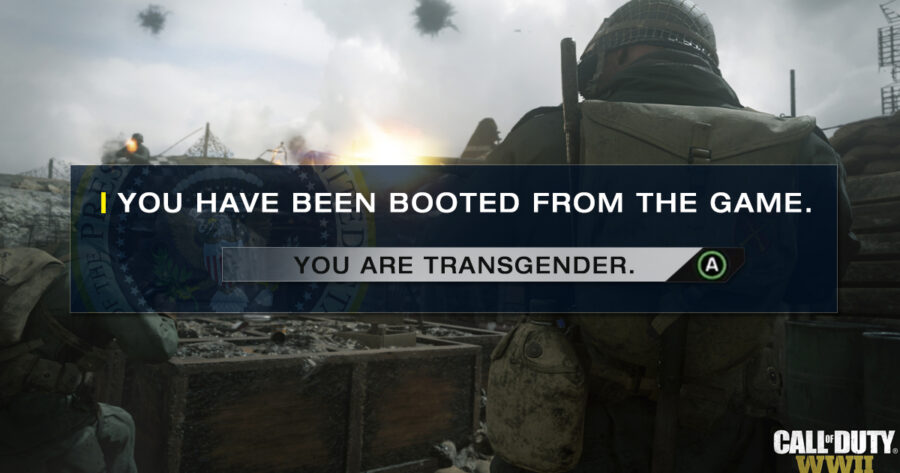 SANTA MONICA, Calif. —­­ Activision has announced today that they will add support for transgender characters in Call of Duty: WWII following increased demand for a more inclusive game, while also fulfilling the wishes of players who want a more realistic military simulator.

“We just want to make everyone feel included,” said a spokesperson for Activision. “And that means both transgender players as well as President Donald Trump. He loves the game and he sends us a ton of money to make it.”

All future Call of Duty installments will now add the option to choose a transgender character and, following President Donald Trump’s controversial decision to prohibit transgender individuals from serving in the armed forces, immediately ban all players that choose this preference.

Many players have complained about the changes but Activision remains firm. “This is about realism. We live in a reality where the Commander in Chief tweets these kinds of orders,” read a press report from Activision published Friday.

The decision also followed backlash from the game’s community following the announcement that there will be playable female characters in Call of Duty: WWII. Many users were upset, with some calling it “totally unrealistic,” while others opined that it was “just another example of women getting more than men,” while noting “girls suck at COD anyways.”

Military generals also criticized the new feature, saying that it will not make the game more realistic as they have blocked the President’s decision to ban transgender soldiers, to which Activision replied, “Eh, whatever. We’ll patch it down the road or some shit.”

The bold decision hasn’t been received entirely negatively, however.  Many have praised Activision for including a marginalized group in its flagship series.

“It’s really great to see such a big franchise taking steps to be more accessible,” said Ellie Vaughn, a trans gamer. “Although it kind of sucks that I can’t actually play and that even if I could, my character would be much more likely to be team-killed than a cis-gender player’s.”

When asked for comment, a spokesperson for President Trump said, “The White House is thrilled with the decision. President Trump has asked me to let you all know that he has a 2.3 K/D and prefers playing with a custom, gold-plated Mad Catz controller that they made special for him.”