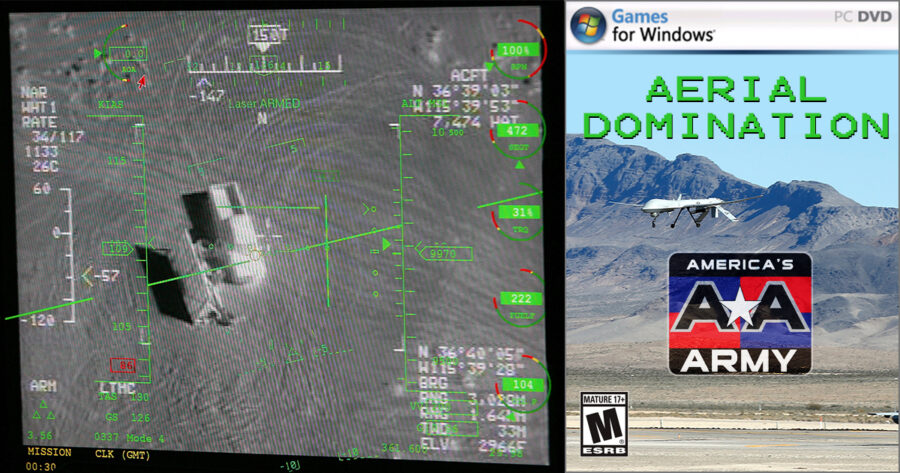 SAN DIEGO, Cali. — Aerial Domination, the new drone-themed expansion pack for the Army-sponsored military shooter America’s Army, has earned acclaim for its bleeding-edge graphics, which outlets have described as “photorealistic,” “uncomfortably lifelike,” and “making us wonder if this is a video game.”

According to General Howard Landis, chief of the U.S. Army Drone Operations and Game Development Division, this eye-narrowing level of immersion is an integral part of the game’s design.

“The America’s Army series aims to transform the gamers of today into the warriors of tomorrow, and this installment has made that process even more efficient,” General Landis said in an interview.

“Players of Aerial Domination are closer to war than gamers have ever been. So very, deliciously close. Closer than… than they will ever know,” Landis added, trailing off and steepling his fingers under glinting, shark-like eyes.

Popular response to Aerial Domination has been mixed, with some gamers put off by the game’s heinous commitment to realism.

“It’s a cool game,” said playtester Antonia Phillips. “But it feels… off. Like, I had a blast destroying this desert village, but it was kind of creepy how realistically that old man begged for his life. I don’t know if you can procedurally generate a guy listing off all seven of his children and their ages like that.”

Others reviews are less conflicted, however

“I’m so fucking hype on this shit,” said Mitchell Beltran. “Blowing the fuck out of that sandy shithole gets me off, son. The one thing that pisses me off is that you can only do a few missions a day, and I usually knock them out in an hour. So when I get bored, I just zoom around blasting civilians and camels and shit. Ka-blaow! Sometimes this warning text pops up telling me I broke numerous international laws, but who gives a shit? It’s a game.”

Despite annoyances like these, Beltran and others have logged thousands of hours into the game, ensuring it best-seller status.

“I must have made the leaderboard or something,” Beltran stated. “Because yesterday the devs mailed me a medal. I pinned it to one of my flatbills. Bad-fucking-ass, dude.”