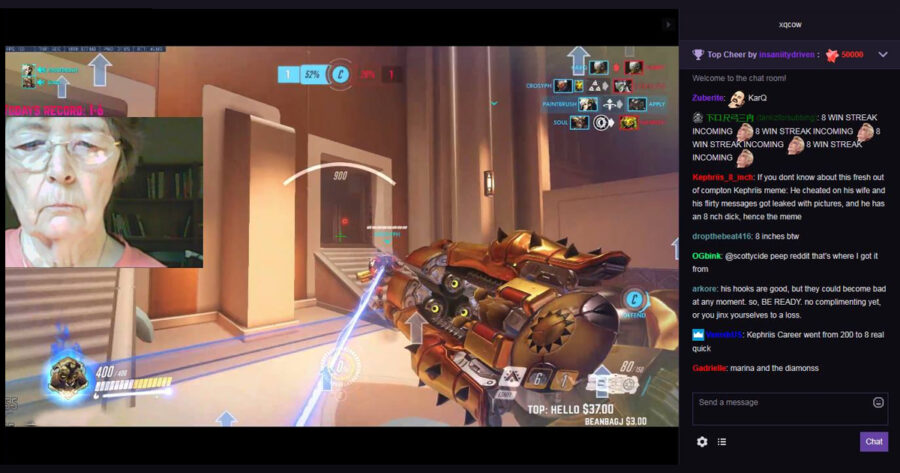 “I just kept clicking hoping I would find the right little tabby thingy,” Mooney said to her legion of loyal Twitch fans, hoping one of them was her son. “My son Aaron usually shows me the computer stuff but he’s away at school. Suddenly all these shoot-em-up videos started. I didn’t realize I was playing.”

According to Twitch users, while Mooney annihilated the competition, she kept typing “Aaron are you coming home for Christmas?” repeatedly into the chat log. Within minutes of the channel starting, Mooney’s stream went viral and she had over a hundred thousand viewers.

“It was the best thing I have ever seen,” Twitch user XxXGoutFoot81XxX said. “She was the perfect combination of funny and talented. Even with her constantly telling us to watch our language, it’s the greatest stream on Twitch.”

Mooney, who accidentally went with the username Facebook.Com and plays with D.Va, beat the competition when no player was able to understand her strategy or predict her movements. She has also become, unknowingly, a major celebrity in Japan.

“We call her Kirāmazārobotto or Killer Mother Cyborg,” one Japanese blogger said via a translator. “Many people cosplay as her at conventions and an anime series about her adventures is currently in development.”

Mooney’s Twitch channel has already spawned multiple parody accounts, a /r/TwitchMom SubReddit, and Conan O’Brien has asked her to appear on his Clueless Gamer segment. Despite the potential to monetize the hugely successful endeavor, Mooney appears to be staying true to her initial inspiration.

“I still can’t get onto Facebook,” she said, when asked how fame has changed her life. “Do any of you know my son Aaron?”

Sources are also reporting that Corsair Keyboards has sponsored Mooney and eLeague teams 3lit3 and h0pskotch are both scouting her for their CS:GO 2018 season.