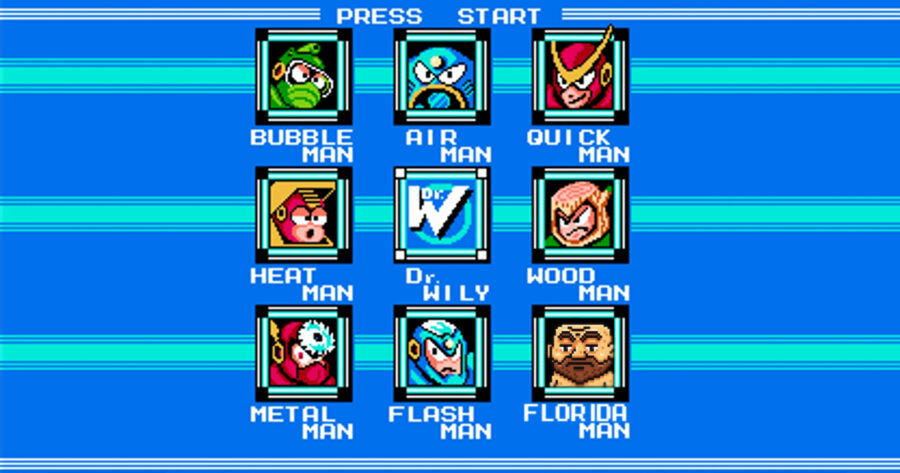 Florida Man, a game warden in the Everglades National Park, had recently began terrorizing tourists and locals after being reprogrammed by mad scientist Dr. Albert W. Wily during his most recent attempt to conquer the Earth.

“Everything was exactly what you’d expect from a swamp-themed Robot Master, from the drop point all the way to the boss gate,” said Mega Man. “Robot alligators, mosquitoes, pelicans, mud traps and one-hit KO thorns everywhere — nothing terribly out of place. It was all so routine, I didn’t even notice the lesions around Florida Man’s mouth.”

Realizing that the critical flaw in his previous 16 attempts to take over the world had been Mega Man’s trademark ability to absorb his creations’ abilities and turn them against one another, Dr. Wily returned to earlier research that yielded the Roboenza virus (from his most recent attempt eight years ago) and expanded upon it. While he was not able to prevent Mega Man from absorbing Florida Man’s signature attack, the Blow Dart, he was able to use the data as a Trojan horse to deliver the Roboherpes virus directly into Mega Man’s body.

“We are dealing with a truly unpredictable and tragic turn of events,” said Dr. Thomas Light, creator and adoptive father of Mega Man.  “Mega Man will very likely be dealing with this virus for the rest of his life. Doctor Wily’s latest plan for global control is an existential threat to the android population and must be dealt with – immediately.”

Dr. Light went on to explain that while herpes may lay dormant for long periods of time, it will never truly go away. Outbreaks can be expected every every several years, and although symptoms may vary, Mega Man’s condition will remain pretty similar.