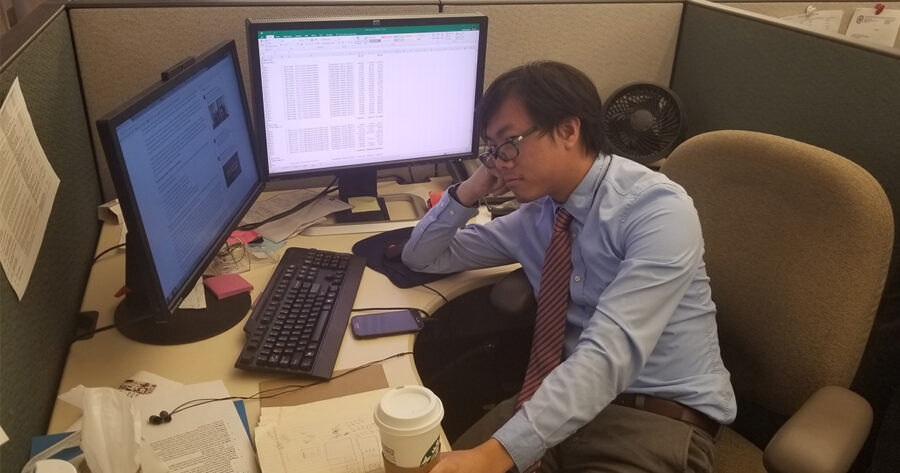 BEAVERTON, Ore. — Customer Service Coordinator Josh Bellamie capped off yet another no-kill playthrough of the work week today, extending his streak to an impressive 276 consecutive weeks.

“Mondays always start off tough when Betty passes off all the work she didn’t do Friday to me before I’ve gotten my coffee,” said Bellamie, according to close sources. “By Wednesday afternoon, you can kinda get into this groove where you’re basically playing on autopilot and know which obstacles to avoid so you don’t break the streak.”

That’s not to say he has been without any slip-ups. “A few weeks ago, I was late a few times due to traffic and I had some dark thoughts,” he continued, “I was very close to dropping my clean hands playthrough in favor of going in guns blazing. Which is a totally valid way to play, especially at this goddamn mortgage company.”

According to those close to Bellamie, there are many trouble spots in the now rote work week that make a pacifist run difficult.

“There are certain sections that initially made for some very trying playthroughs,” said Bellamie. “Like whenever Susan would come up to me and talk about her son’s fucking baseball team, or when everyone in the break room is basically shouting Game of Thrones spoilers, I definitely think about changing gears to a more violent play style just to feel alive.”

When asked how long he thinks he will continue playing through the work week in this manner, Bellamie was unsure. “I mean I got this grind locked down pretty well. I was promoted after just a few months and got a pay raise. But at the same time, Barry wears his fucking sandals on Casual Fridays, and eventually I could see that motivating me to switch things up for good.”

When asked what that would entail, Bellamie closed his eyes and smiled.

“Any time you play something over and over like this, you find the patterns in all the enemy behaviors. If I do have to switch to a violent playthrough, I know exactly how I’ll do it.”