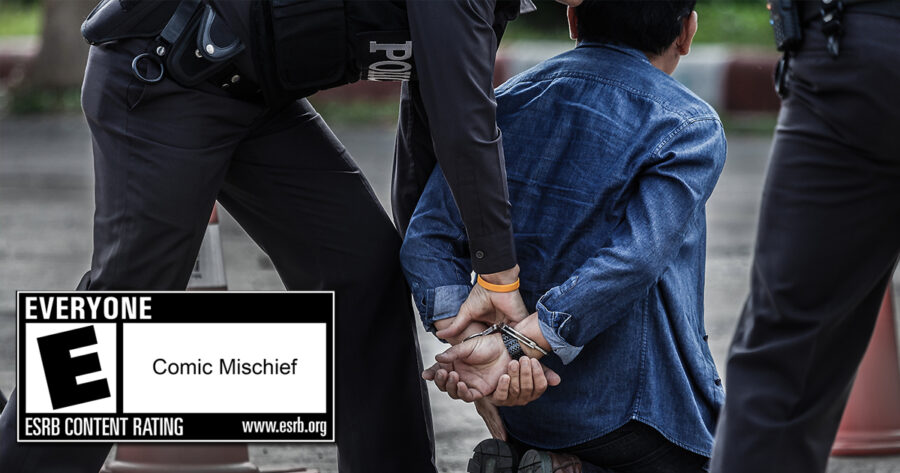 BUFFALO, N.Y.  — After a night of allegedly bawdy behavior, Jason “Buzzly” Godrich was detained early this morning by Buffalo police on the charge of comic mischief.

Local bartender John Hagerty says that Godrich, 27, came into O’Dallahan’s Irish Pub at around 9pm yesterday evening and was immediately a source of trouble.

“The second that guy came through the door, I could already tell he was on the verge of mixing it up with some cartoonish tomfoolery, if you know what I mean,” said Hagerty. “Personally, I think he was appropriate for everyone, but obviously the law disagreed.”

“Ugh, first he tried to look up my skirt,” said frequent customer Susan Flannery. “Then he started bouncing in place, sweating, and blushing like a cheeky rascal.”

Godrich claims his intentions were not malicious, despite allegations that he shot another patron in his ruddy bottom, resulting in a heck of a dang altercation. Witnesses claim the brawl took place entirely in a big, dusty cloud, with arms and legs flailing wildly in and out of it.

“[email protected]%&*!!,” Godrich reportedly yelled when the police arrived on the scene, then he leapt behind the bar, took the bartender’s coat and hat, drew a moustache on his face, and asked, “What can I do ya for, officer? Sidecar? Hot Toddy?”

Clients said the officers saw through the facade and apprehended him immediately. Godrich attempted to take the policeman’s hat, but was met swiftly with a taze. He was then shackled and thrown into the back of a giant van, ending another night of wacky shenanigans.

“Sad to say this one’s a repeat offender,” remarked the officer on site. “We busted him a few nights back for fantasy violence, alcohol and tobacco references, and suggestive themes.”