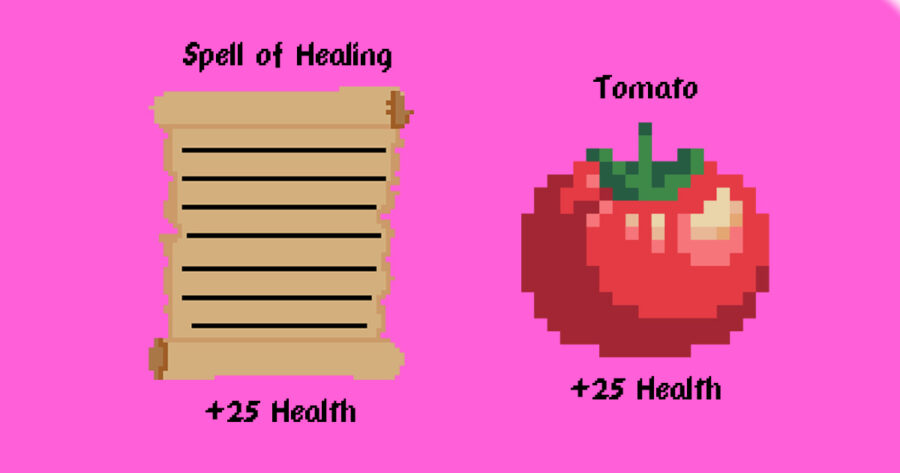 SOLANUM REALM — The magic and agricultural industries of the realm of Solanum are in turmoil following a recent exposé that the popular life rejuvenation spell “Spell of Healing” supplies the same amount of energy as eating an average farm-grown tomato.

“As soon as I saw the results of our tests, my first thought was, ‘The people have to know about this.’” explained whistleblower Darthmar the Terrible, a rogue belonging to the party that discovered the controversy after frantically trying to heal up after a difficult random encounter. “People in some towns are spending as much as 250 gold for the scroll that teaches you Spell of Healing. As a rogue I steal from people for a living and even I think this is crooked.”

Wizards across Solanum are scrambling to defend the fair market value of their arcane magic considering that all of their efforts to distill the very essence of life itself are just as potent as naturally occurring fruits and vegetables.

“Listen alright, it’s a level 1 spell, what do you expect?” Daldoff the Grey, Wizard of White Mountain explained in a press release through a spokesperson. “We have to water the entry-level spells down to be able to distribute them to everybody, that’s just economics. Maybe this is more about this generation being spoiled by instant gratification. Either save up your gold for a professional-level incantation if that’s what you want, or hit the books and learn how to do it yourself. There’s 3 schools of magic on this continent alone, if you put in the work and get to level 25 and you can spam Continuous Heal as long as you need, you ingrates.”

At press time, the price of antidote vials has plummeted after a separate discovery that the body naturally heals poison after a good night’s sleep.