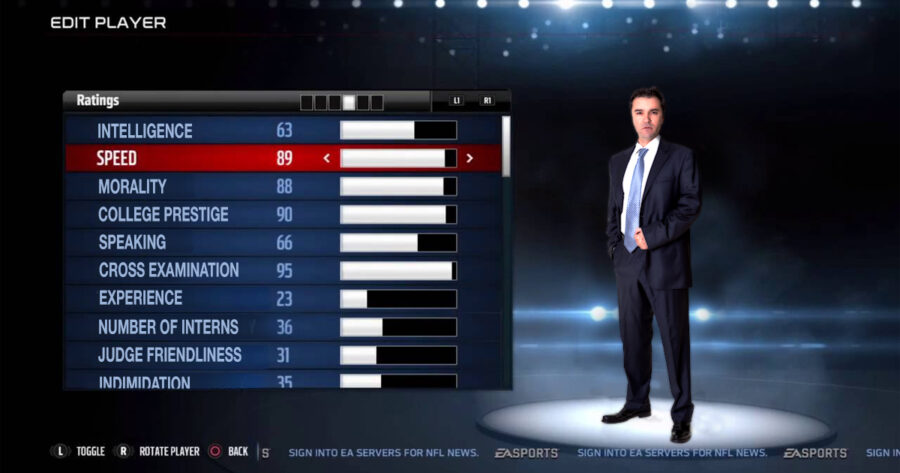 NEW YORK — EA Sports announced today that the 2018 version of their popular Madden NFL franchise will now include a crucial component of the modern NFL: the option to draft the nation’s best defense lawyers.

The team at EA realized that the key component missing from their Madden games was the gritty realism of life off of the gridiron as a defense attorney defending their favorite star players.

“The average NFL players spends 40 percent of their free time in court for both criminal trials and civil lawsuits,” said Dorothy Wilson, a spokesperson for EA. “We wanted to take gamers inside that aspect of life as a professional football player through the eyes of their very well-paid attorneys.”

According to the press release, the new Madden 2018 game now gives fans the option to create an attorney in their own likeness and start slowly building up their caseload.  Gamers create their own legal empire funded by defending some of the most famous and entitled millionaire athletes in the country.

One unique feature of choosing to play as a defense attorney is that there is only one difficulty setting: Easy Mode.

“We wanted to add additional difficulty settings, but we realized that it would be unrealistic,” explained Wilson at a press conference. “Since we wanted the game to mimic the real experiences of an NFL lawyer, we had to make it easy for clients to get a light sentence for offenses ranging from DUI to illegal possession of a firearm.”

“Really the only time being an NFL defense attorney gets difficult is when the player did something truly awful like drop a game winning touchdown,” added Wilson. “That’s when you can be sure that the murder charge is gonna stick.”