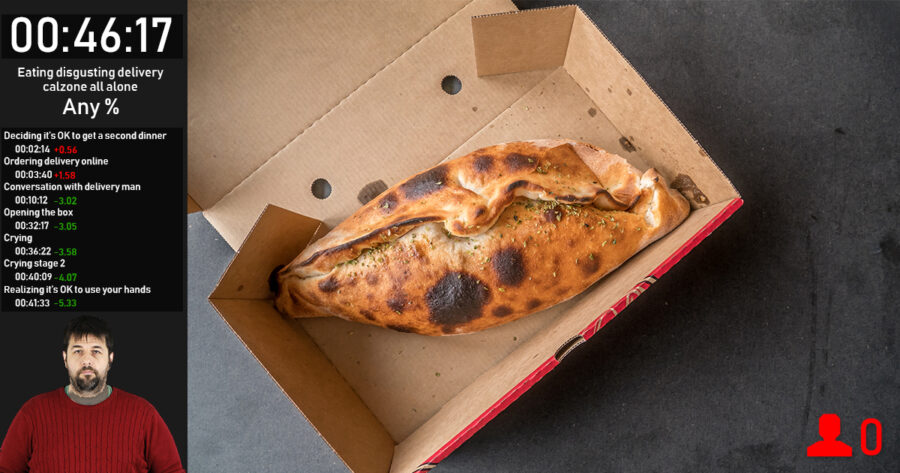 “My girlfriend dumped me about a month ago, and I started working on this run right after that,” said Echelson, catching his breath after the 46.17 second completion, which was broadcast on Twitch by an astonished employee. “I come here every night. They know my name and order, so that already clips, like, thirty seconds off my time. Being lonely really helps your game because you enjoy the calzone ten times more, and since I’m all by myself I don’t care if I make a mess.”

Roommate Jason Bravada was on hand to witness the record breaking performance, having walked to the restaurant to check on his friend after noticing Echelson hadn’t logged on to Overwatch in over a week.

“He took the break up pretty hard, and I was a little concerned since he’s been MIA,” he said. “I heard he’s been hanging out down here at Paulie’s Pies a lot, and now I see that he was working on something very special. I mean, he just blew straight through that fucker. Pure beastmode.”

Though not involved with the speedrunning scene as long as many of his contemporaries, Echelson displayed some truly innovative techniques during the run, such as tearing directly through the box the calzone comes in, and eschewing any cutlery, plates or napkins, in exchange for a more primitive and aggressive approach.

“Some people think you need that shit for the first half to avoid third degree burns,” Echelson said, while removing his signature fingerless gloves. “Not necessary. All that does is slow me down. The idea is to have the calzone inside of my body as fast as humanly possible so I can pass out.”

Many in the speedrunning community have wondered what the newly single and highly discussed calzone champion will pursue next.

“I should probably change the light bulbs so I can start cleaning my room,” the champion stated.  “And then maybe I’ll get around to throwing away those jars of urine. Maybe.”