LEAKED EMAILS: Solid Snake Confided in Aides He Has No Idea What’s Going on Anymore 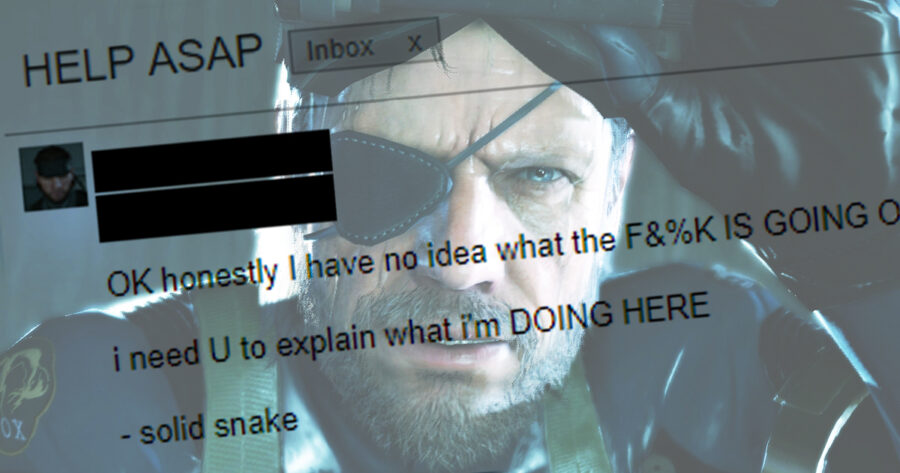 “I have so many questions floating over my head right now,” one email opens.  “I really have no clue what the hell is going on anymore. Robots, ninjas, triple agents, clones, helicopters… I could really use help making sense of all this.”

One of the super soldier’s aides, known simply as “Otacon”, appears to disregard Snake’s befuddled state, heaping on more plot points.  “We don’t have time to stall here! There is a psychic and a tank man trying to kill you! This is no time to hide under a cardboard box and cry.” Snake’s clueless disposition unravels further as the emails go deeper.  “I think my father might be my brother.  Or maybe it’s the other way around.  Russia may have also been involved somewhere along the line, but who knows? I’ve seriously lost count of how many times someone’s screamed the phrase ‘It’s not over yet!,’ at me.”

Possible romantic interest Meryl Silverburgh also had a series of exchanges with Snake, attempting to bring him up to speed and boost his spirits.

“Snake, you can’t give up now!  We have to destroy Metal Gear, which is being piloted by your brother, who is a clone of your father, who is seemingly trying to take over the world!” said Meryl in the recovered email. “Do it for the president, who happens to be your OTHER clone brother who may actually be behind everything!”

These unsettling emails could signal a major turning point in the saga of Solid Snake.  He has even hinted at taking his first ever vacation after this mission in one email, claiming he was pretty sure the government had injected a retrovirus in his system or something.