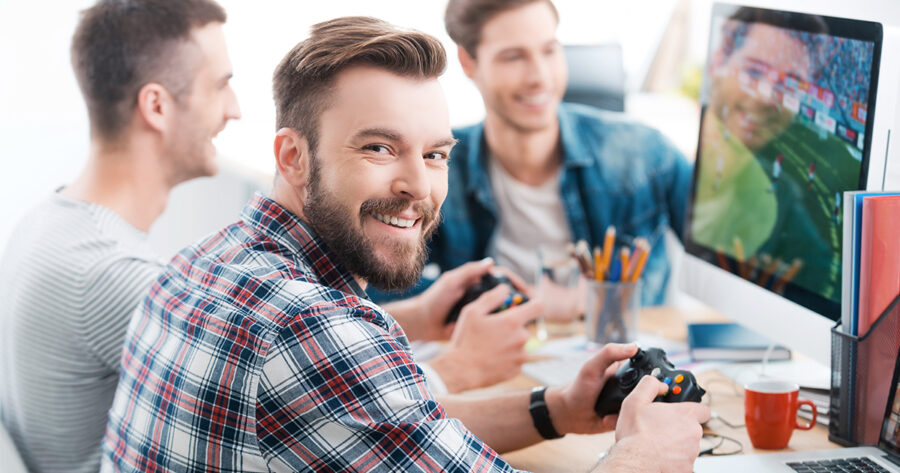 Many gamers are outraged by the ArenaNet firing scandal and are wondering in an industry rife with questionable companies, which game developers they can feel good about supporting. Well look no further! These progressive heroes have worked around their misogyny by simply not hiring any women at all.

Known for producing balls-out splatterfests like WAR DICK and WAR DICK II: ENEMIES OF THE DICK, the game boys at OctoCorp wouldn’t dream of firing a woman over a tweet. In fact, they wouldn’t even fire a woman over major misconduct, violence, or even embezzlement. Because they don’t employ a single women. “The guy who does our art is pretty fruity,” said level creator Bobby “the Knob” Knoebbel, referring to designer Pol Andrews. “I haven’t really trusted that weirdo since the day he wore a tucked in button-down.” Andrews asked us to mention he is looking for a new job.

Ozymandias is an indie developer best known for its three-hundred hour long walking simulator based on the art of Diego Rivera and the literature of David Foster Wallace. Their core principle is that, in order to tell unique stories, you must constantly question your surrounding reality, but never your hiring practices. “We would never fire a woman over a tweet because we value diversity of thought,” said Head of Design Lando Mack. “We just have not been able to find any women who fit into that yet, so it’s the only diversity we have.”

We reached out to discuss the ArenaNet controversy with Conrad Marcona, a game developer working at Nohomo Games, which builds roleplaying games. “We don’t have any women on staff as far as I know, but every single one of our games has an entirely female cast,” explained Marcona. “That’s basically the same, thing, especially because they’re really hot.” According to the multiple members on staff, the problem is that it’s “super hard” to find a woman who can “hang” with the dev team. “I mean of course we would hire a woman if the right one came along, we are feminists, but so far none have managed to get past the 2nd stage of our interview process where they have to sit through an entire Joe Rogan Experience podcast.”

OK so we didn’t actually look these guys up, but they’re the company that made Leisure Suit Larry, so it’s pretty safe to say we are in the clear.