Hands-On With Sonic Frontiers: Why Do I Have to Make Sonic Go to the Bathroom So Much? 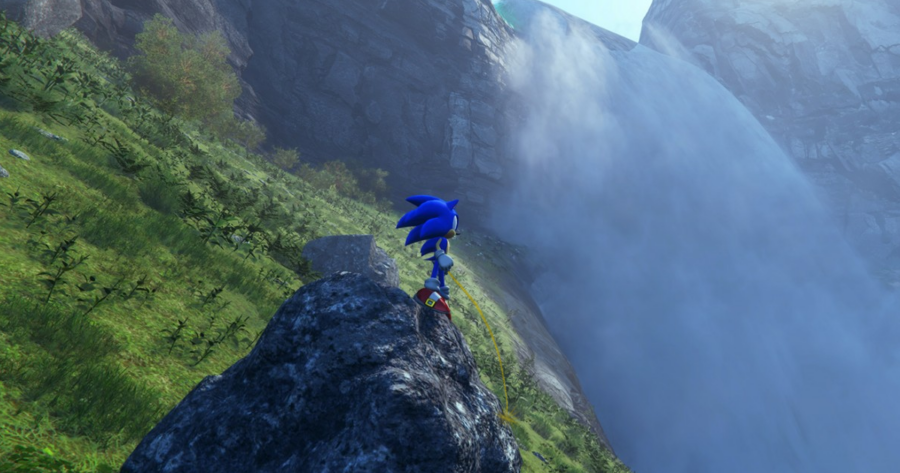 Shockingly, this integral part of the Sonic Frontiers gameplay was not teased in any of the preliminary footage or trailers that were released up until this point. So far we’ve seen and heard plenty about exploration, open worlds, and skill trees, with preliminary stills and footage garnering comparisons to things like Breath of the Wild and Elden Ring. They really kept the bathroom stuff up their sleeve on this one.

It was after finishing the game’s first mission, a relatively simple affair tasking me with learning the games basic controls, that Sonic first started loudly complaining about having to go to the bathroom. All of my current active missions were paused, and I was now tasked with helping the blue bomber relieve himself before anything else could be done. Any momentum garnered from that first taste of what Sonic Frontiers was all about was immediately halted as I searched high and low for somewhere for Sonic to go.

Now, if this was something that came up once in a while throughout the game, an ill-advised flourish attempting to add authenticity to a game that is bringing a cartoon mascot into a nearly photorealistic world, I could forgive and forget. Sonic games are hardly known for being perfect, and if an occasional trip to an inexplicably placed urinal or outhouse is the worst thing a game has to offer, it’s probably a pretty okay game.

But alas, dear gamers, it was no isolated incident. After nearly every mission, often before I could even decide what goal on the map to pursue next, Sonic would begin loudly wondering where the nearest bathroom was, and whether or not he was going to be able to make it.

“No time to do anything else,” he’ll yell. “I’ve gotta find a bathroom right away!”

And once again, your HUD disappears, all active missions and markers are temporarily deactivated, and a search for a “decent toilet” becomes the only available goal.

Actually, that’s another thing that doesn’t make sense, is Sonic’s insistence on finding a proper bathroom when he’s just got to take a leak (most times). In an emergency, I don’t mind going outside, assuming nobody can see me. I think most of us would say that. The giant open landscapes of Sonic Frontiers are not exactly jam packed with people. So wouldn’t you think a Hedgehog would be okay with once in a while crawling into a bush and just taking care of business? Nope, not Sonic. He says he needs a mirror and to be able to wash his hands. I guess it’s probably a positive influence on kids playing the game, but I’d be lying if I said I was having fun with this game so far, what with all the trips to the bathroom and whatnot.

Fingers crossed there’s less of this once you get a little farther into the full release, but it’s really too early to say. As of right now though, it’s hard to recommend you play Sonic Frontiers when it comes out. There’s just too much stuff about finding a bathroom.