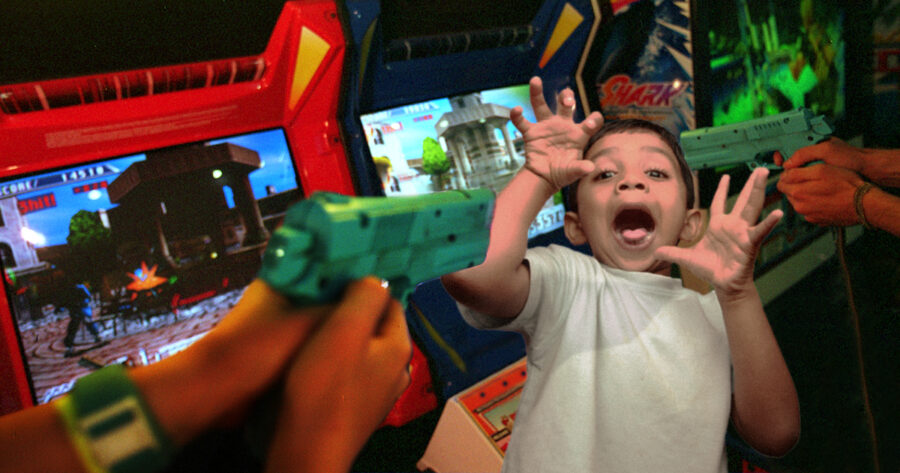 HEMPSTEAD, N.Y. — Brian Applegate has developed a ritual while playing House Of The Dead at his local arcade involving shooting the game’s gun at 10-year-old arcade regular Gilli Bordeau every time he needs to reload.

“Look—it’s not like I actually want to hurt anyone—but the only way you can reload is by shooting this one kid off-screen repeatedly,” said Applegate. “Blame the game designers. This arcade is full of people. I pretty much have to shoot someone to reload.”

Bordeau, a fighting game enthusiast, is very disturbed by the constant targeting, according to close sources.

“I get that you have to reload offscreen, but why shoot only me every single time? Earlier today, when I moved from Street Fighter to Mortal Kombat, he followed me around the arcade so that he could keep his light-gun pointed right at my face,” said Bordeau, glancing over his shoulder nervously to see if another imaginary bullet from Applegate would come soaring towards his head. “Did I knock him out with Chun-Li or something? I can’t keep track of every grown man I’ve knocked out with Chun-Li.”

According to those close to Applegate, Bordeau’s discomfort is not an intentional side effect of his reload-aiming.

“I wish I could stop shooting this kid but ever since I started shooting him to reload, I’ve been getting higher and higher scores,”  said Applegate in an interview. “I’m lasting longer than ever before in this game. I have to shoot him; he’s my good luck charm that I shoot in the face. Also I have to lock eyes with when I do it because ever since I started doing, that I’ve been making it past The Hermit. One time I got a high score by just slapping him in the face with the plastic gun.”

Bordeau, however, refuses to find a different arcade to play in. “This is 3 blocks from my house. I’d never let a little thing like getting shot in the face hold me back,” said Bordeau defiantly.