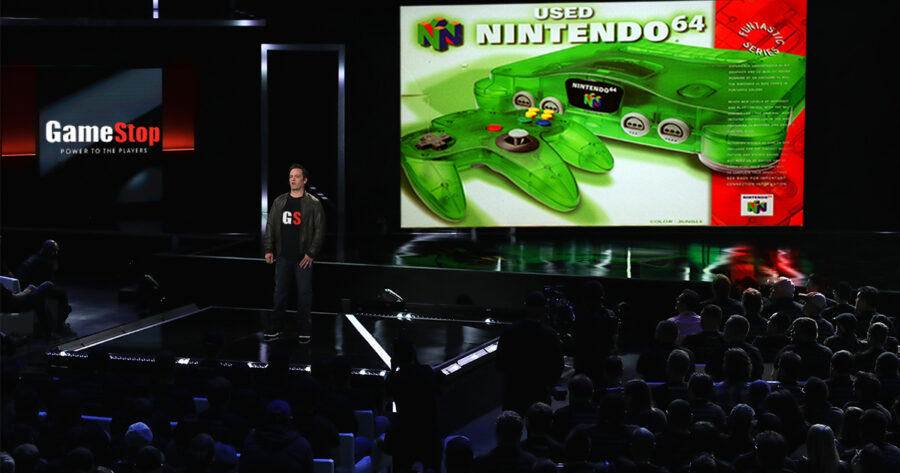 “We got a 64-bit processor in this baby,” Raines said, “62.5 megahertz graphics card, 4 megabytes of RAM, a Goldeneye sticker covering the reset button, and a single controller with a broken d-pad!”

While some are calling this a game changer for the industry, the system itself cannot change games. A copy of Zelda: Ocarina Of Time is pretty much glued in there now because someone spilled Mountain Dew on it.

“There are a lot of people I want to thank,” Raines stated after settling the crowd down. “First and foremost, James Fisher. Without him trading this system in I don’t know where we would be. Then there is my boy, Brad Patterson, GameStop employee extraordinaire, for making this deal possible!”

Raines went on to thank the “programmers” who spent an entire afternoon ensuring the system functioned properly and was debugged (a roach had died in the Memory Expansion slot).  They cleaned the controller ports with compressed air and replaced the AC power adapter because the original showed signs of significant feline chewage.

The announcement has been met with mixed fan reaction.  “I love it,” stated 12-year-old Mark Ellis, “There aren’t any massive update times, there are already almost 300 games in the catalogue I could hypothetically play if I could get that damn cartridge out, and the graphics are so retro.”

“All it does is play games,” stated detractor Ashley Simon, “You can’t download indie-games, you can’t stream Netflix, and you need three hands to work the remote. What a joke!”

Sources indicate that GameStop is already hard at work for next year’s convention, hinting that negotiations have begun to secure “the world’s most powerful console” — a Sega Dreamcast from a woman whose son has just left for college.