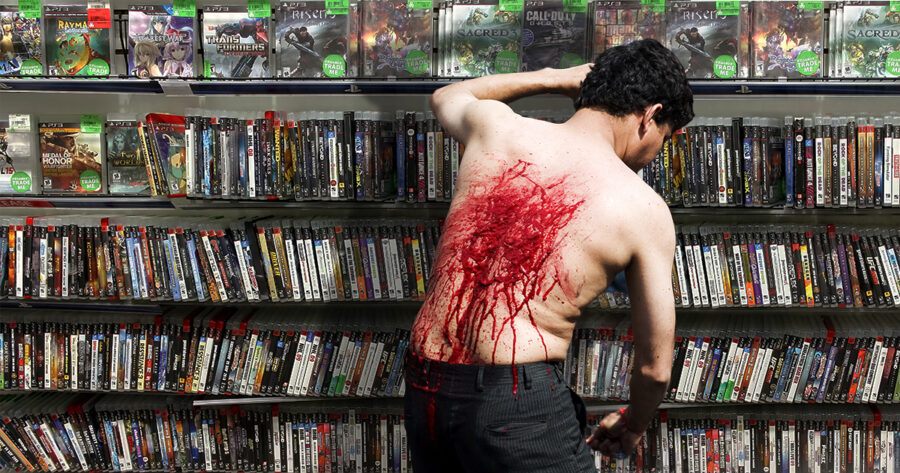 BINGHAMTON, N.Y. —  GameStop sales representative Donald Simpson quietly walked to the employee breakroom and proceeded to whip himself after failing to convince a customer to pre-order Destiny 2 earlier today, according to close sources.

“Working at GameStop means making minimum wage and owning your mistakes,” said a bloody Simpson as he delivered another lacerating blow to his back. “It was such an easy sell; everyone knows the sequel is always better than the original. I’ve let everyone down.”

As blood seeped out from beneath the back room’s door and onto the sales floor, GameStop manager Katherine Weiss quickly began soaking it with a towel.

“As much as I hate to see my employees hurt, I have no sympathy for anyone who screws up a pre-order,” said Weiss, wringing the bloody towel out into a garbage can.  “Actually come to think of it, if him and his whole family died right this second I’d feel nothing for that subhuman monster. I mean, Jesus Christ, we even offered early beta access with the purchase. This kid is as worthless as these Game Informer magazines we can’t get rid of.”

Carson Sullivan, the customer Simpson couldn’t convince to pre-order Destiny 2, even after explaining it would only require five dollars and showing Sullivan his scarred back, left the store immediately after the unsuccessful pitch.

“To be honest, I just walked in because it was hot outside and I needed to cool down. If I knew hanging out in the air conditioning for five minutes while I looked at Funko Pops would lead to a man brutalizing himself I would have never have come in,” said Sullivan.

“Plus, I pre-ordered it digitally already,” he added.  “Who buys physical discs anymore?”