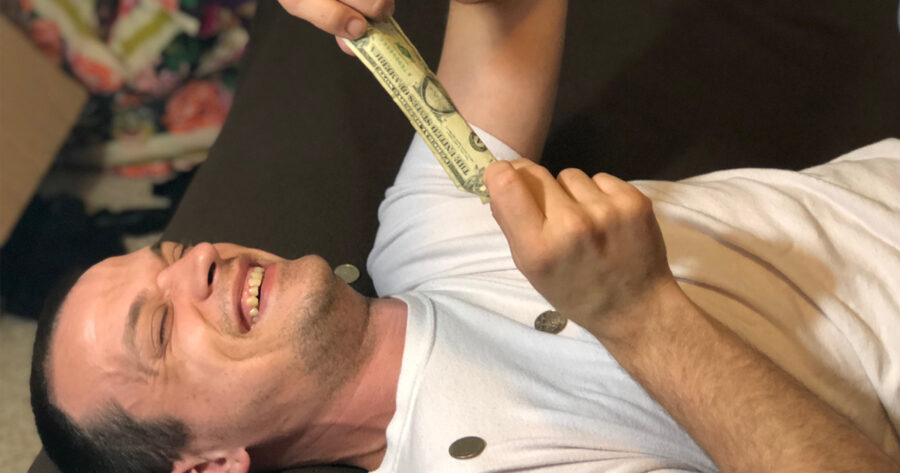 AKRON, Ohio — Sources confirm that local gamer Gary Norris has spread the modest sum of $3.25 saved by purchasing a used title of inFAMOUS Second Son at a local GameStop in his bed, as part of a lavish display of decadence.

“Something came over me, it was crazy,” said the red-cheeked gamer, after spending nearly fifteen minutes rolling around in a small collection of singles and loose change. “It was such a rush. I work hard for my money, and to save three dollars and twenty-five cents is unreal. Hey, is that a nickel on my butt?”

Norris revealed that he had entered the GameStop on a whim while passing by. After refusing several pre-orders and strategy guides, he was delighted when an employee told him a used copy of the game was available for $19.99. Store clerks told reporters that Norris was overwhelmed by the amount of money he’d saved, thanks in large part to the chain’s easily understood customer rewards program.

“Oh yeah, well, it’s just a super solid deal,” said GameStop employee Mitch Brackett.  “I went ahead and set him up with a year of the Preferred Power Pro Player Plus Point Perk Program Program, so on top of the money he saved, he’s gonna get a full year of Game Informer magazine! He was really excited about receiving monthly video game coverage in the mail.”

“Plus the Game Informer magazine is free, even though experts value its content to be about $0.07. So the total savings really add up to $3.32!” Norris excitedly added.

Norris’ mother, Ruth Norris, confirmed that upon his return home, her son sprinted upstairs, loudly declaring it to be the most wonderful day of his life. It is at this point, the money was strewn around the bed whilst Norris partook in his disturbing celebration.

“I’m glad he’s happy, really I am,” said the elder Norris. “I just hope he checked the price on Amazon before he started rolling around in all that money.”

At press time the used copy of inFAMOUS Second Son was refusing to load properly in Norris’ Playstation 4.