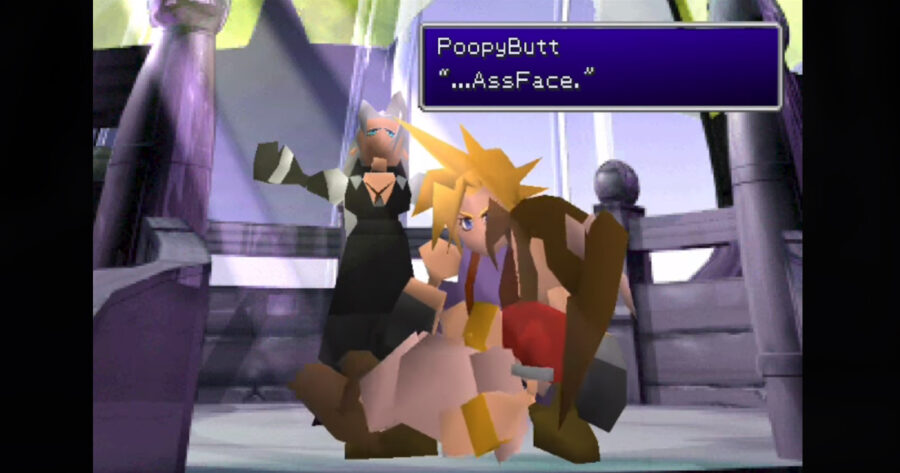 DULUTH, Ga. — Gamer Aaron Hughes found himself openly weeping over a character he had named AssFace at the start of his first ever Final Fantasy 7 playthrough.

“I was playing this kinda half ironically. I named the blonde guy PoopyButt, which is hilarious and then there was this girl character that I named AssFace,” Hughes explained, wiping tears away. “But when, spoiler alert, Sephiroth kills her, I was screaming, ‘AssFace no!’”

“Over the course of the game, I feel like AssFace and PoopyButt, along with Fuck, became some of my closest friends,” Hughes added.

Hughes stated that he had no idea the game would give him “the feels,” and confirmed that he found it funny when someone said, “What’s up, PoopyButt?” He also expressed regret in naming other characters: Yeezus, SlickNuts, [Expletive] [Expletive], UberSkank, Thrillhouse, and Fuck.

“I thought it would be hilarious, but then I came to really care about what happened to SlickNuts and the gang. I almost want to start over but I already logged thirty hours of gameplay and I am not about to start again.”

Several local gamers reported that this isn’t the first time Hughes grew emotionally attached to one of his characters. According to those close to him, Hughes refused to play Dragon Age: Inquisition after creating his character Rick Roll because he didn’t want anything bad to happen to him.

“He once spent three hours creating a character for Fallout 4 only to name it PEN15,” friend Joshua Carter said. “I’m sure when Fallout 76 comes out he is going to name his character Ken Bone or Stinkfinger or something stupid like that. It’s like he’s afraid to have a real emotional connection with a video game character from the get go. Or he just has a very gross sense of humor.”

While Hughes claimed to have learned his lesson, friends have stated that upon starting The Legend Of Zelda: Ocinara Of Time, he immediately changed Link’s name to Dingleberry and laughed heartily.