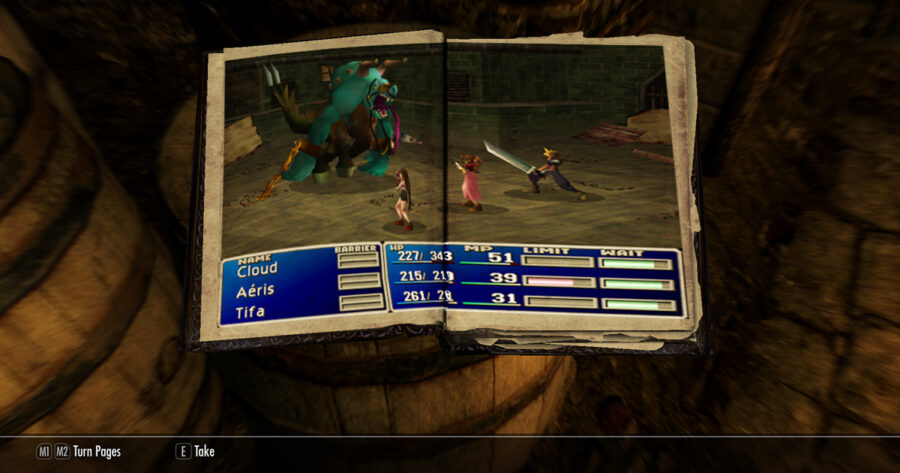 Bethesda announced today that 1997’s legendary roleplaying title Final Fantasy 7 will be available inside of all versions of The Elder Scrolls V: Skyrim, effective immediately.

“We have a goal here: get Final Fantasy 7 into as many people’s hands as possible,” said Square Enix President Yosuke Matsuda. “We felt pretty good about next year’s Switch and Xbox ports, the upcoming remake, and the PlayStation Classic version joining the Steam port, the iOS port, the Android port, and the original title itself, which is available to download on PlayStation 3. But, we still weren’t reaching one of gaming’s biggest demographics: people playing Skyrim on all of these platforms.”

A mandatory update to all versions of Skyrim, available now, will introduce an odd site to the College of Winterhold; an original Playstation hooked up to a 27 inch RCA tube television. Players of all classes and races will be available to play the classic within a modern classic, as long as they purchase it for $29.99.

“This is strange,” said user Gwen Belvedere. “On one hand, it totally blows the immersion of Skyrim, having a twenty year old system and TV just sitting there. But on the other hand, Final Fantasy 7 is one of the defining games of all time, so fuck it!”

“This is a place where mages hang out,” she continued. “Maybe someone put it in there with magic?”

The in-Skyrim version of Final Fantasy 7 has been faithfully adapted, and Matsuda even hinted at one or two surprises that may have been introduced to the game.

“We have some pretty exciting things lined up in this version of Final Fantasy 7,” he said.  “There’s even an arcade machine inside of the Golden Saucer amusement park that you can play Skyrim on!”

Fans have received the new addition to Skyrim with much enthusiasm, and several fan made mods have already been released, the most popular of which replaces iconic antagonist Sephiroth with Thomas the Tank Engine.