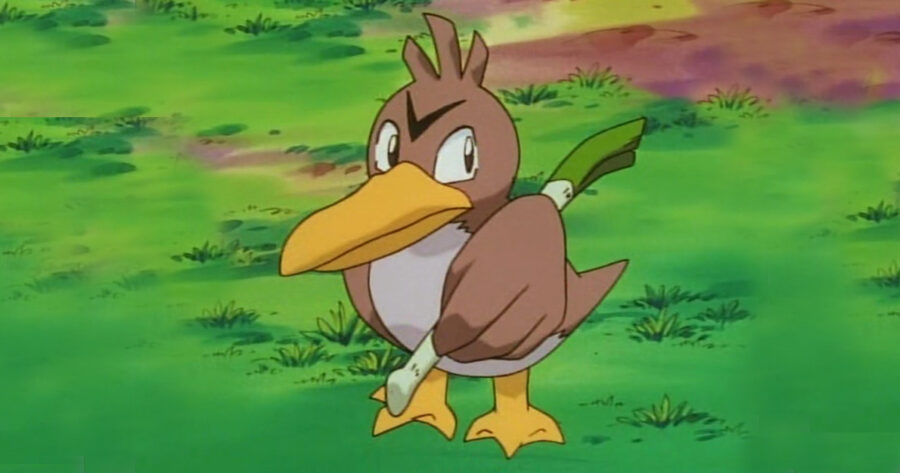 TALL GRASS, RT 39 — Farfetch’d confided to reporters this week that he is unsure how much longer he can hide the fact he is just a small, brown duck holding a leek.

“I’m really stressed,” noted Farfetch’d, floating calmly in a pond off Route 39, having perfected the ability to repeatedly say his name should a young trainer wander by. “I’m just a normal duck with a penchant for soup vegetables. This whole thing started as an administrative error, and I was gonna let them know there was a mistake, but then I saw how big the whole Pokémon thing became. It was nice to be in the spotlight.”

Suspicions began to swirl following a massive battle between two young rivals on their way to Olivine City, during which the captured Farfetch’d had no choice but to continuously throw his leek and then run to pick it up.

“It all adds up,” notes trainer Cap Churr, who decided to release Farfetch’d back into the wild following the matchup. “He did nothing to help the battle, which led me to look into his stats. His species is listed on my Pokedex as ‘Wild Duck’, which doesn’t sound very Pokémon-esque, especially compared to whatever the hell Mr. Mime is supposed to be.”

“Plus his weaknesses include ice, electricity and rocks — which, if I had to guess, are probably the top three causes of deaths for ducks.”

The Farfetch’d bombshell has opened a further investigation into other questionable Pokemon. According to those close to the situation, Ekans has been on the run after investigative journalists spotted her name written down in the reflection of a mirror.