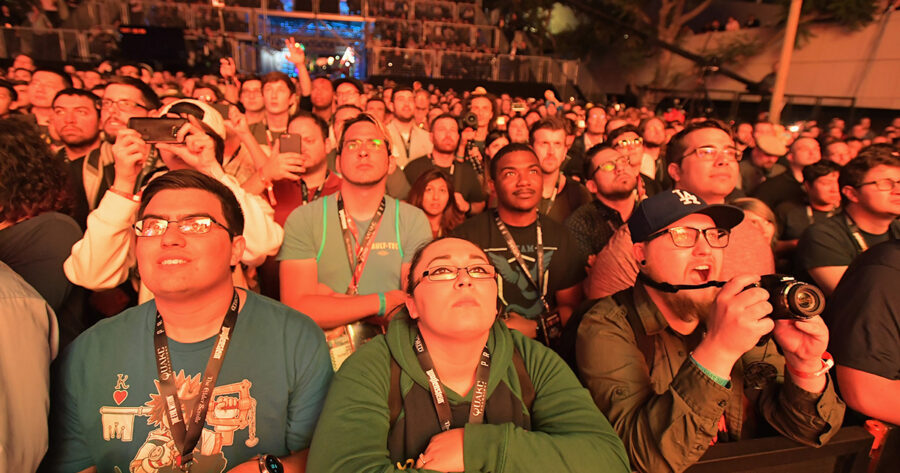 SAN FRANCISCO — Fans of the long running Quest of the Sage series expressed overwhelming enthusiasm today, after publisher Thunderstone announced the game’s latest entry will be a touchscreen card-battler available on iOS devices.

The announcement followed a month-long teaser campaign that began with a mysterious countdown clock on the publisher’s website, and continued with daily hints until yesterday’s press conference. Thousands lined up for the announcement event days in advance, certain a new QoS game was being announced. Streaming services allocated extra server space and bandwidth for the live feed of the event, correctly expecting millions of concurrent viewers.

The game series, whose die-hard fans call themselves “Questers”, hasn’t had a numbered entry since Quest of the Sage 4: The Continent of Fire topped every best-of list in 2009. Since then, fans have enjoyed an HD remaster of the original QoS and, of course, 2014’s smash hit Quest of the Sage Pinball. Despite these releases, many were holding out for more, like Steam user QuesterThaJester who wondered in a forum thread whether it would be a 5th QoS title, “or maybe a super fun endless runner!”

“It’s one of my favorite action adventure role playing games of all time and there’s nothing I want more than to spend real money on virtual cards based on it,” said super fan Rebecca Crant. “If I could boil down the series to its defining element, it would definitely be ‘photos of the characters.’”

Fans in the standing-room-only event thunderously applauded when Thunderstone CEO Jerome Blankenship announced Quest of the Sage: Deck of the Minotaur. Behind him, the screen of his iPad was projected as he showed the different card types, many featuring favorite characters from earlier QoS games.

The applause evolved into a deafening standing ovation when Blankenship announced the game was free, and demonstrated the “Sage Store” feature to show all the new cards that can be bought, some necessary to advance in the game.

The hashtag “#finallyfreetoplay” has been trending on Twitter since the reveal, appending tweets like @QoSPhreak’s who said, “This changes everything! I can’t wait to pay for new character packs and collect them all! #finallyfreetoplay”

Despite the generally favorable reaction, not all fans are pleased. A prominent user in the r/QoS subreddit, Sage69, expressed disappointment in the nature of the latest release in the beloved franchise. When asked if he was disappointed that the new game won’t be the long-awaited 5th Quest of the Sage title, the redditor said, “No, I’m just super pissed there’s no Android release date.”