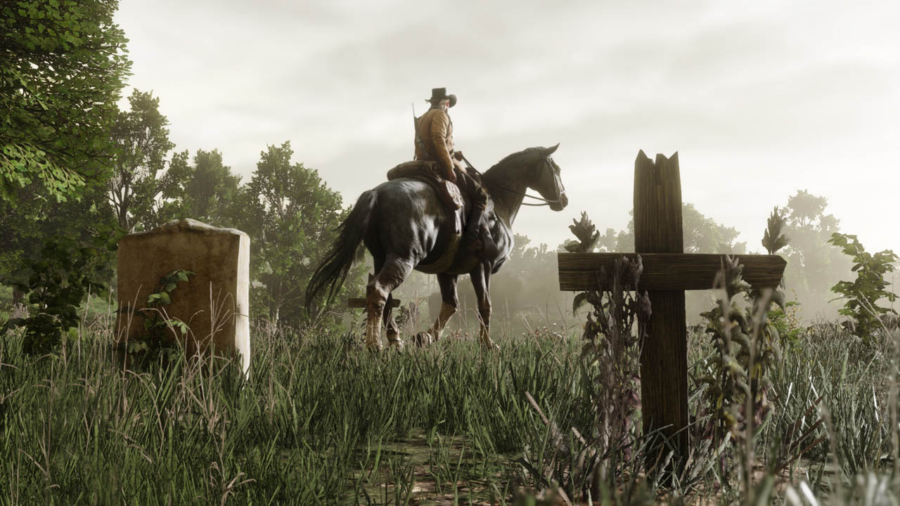 “We really care about the realism of this game series, so after Daniel [Collier] collapsed from exhaustion during his eighth-consecutive 100-hour work week, we put his name on one of the tombstones,” said Collier in a taped piece that followed Schreier’s article on the perilous working conditions during the game’s development. “Our bosses thought it might make the world feel a little more realistic for players as well as help honor the employees that have fallen in the making of this game.”

“Getting permanently memorialized in a masterpiece is a clear sign Rockstar cares about us,” Collier added. “It actually made me a little jealous my husband died and I didn’t.”

Daniel Collier wasn’t the last developer to be mentioned in-game. As the development cycle neared completion and “the crunch” began, developer deaths at Rockstar spiked dramatically.

“We eventually got to a point where we had a full-time ‘tombstone design’ guy who literally spent 12 hours a day programming the names of the deceased onto tombstones. He’d ensure the font was era-appropriate and that the headstone was realistically weather-worn, as if it’d been there for a few years already,” said President Sam Houser. “Eventually that guy died too, but we were ready to ship so his name never made it into the game. Maybe we will include it as DLC down the line!”

The tombstones incidents inspired Rockstar management to explore other unique ways to build out the in-game world.

“Yeah, every orphan in the game is named after a developer’s kid who became orphaned upon their parents’ death,” revealed Vice-President Dan Houser. “We didn’t include kids whose parents died outside the office from, say, crashing their car on the interstate after leaving work at 3 AM bleary-eyed and emaciated from programming for 16 hours straight. That’s not on company time so it didn’t count.”

As of press time, Rockstar was experimenting with applying their extreme attention to detail to non-gameplay elements by adding an achievement called “Honorary Rockstar Employee” that is awarded to gamers who play for 100 hours straight without dying.