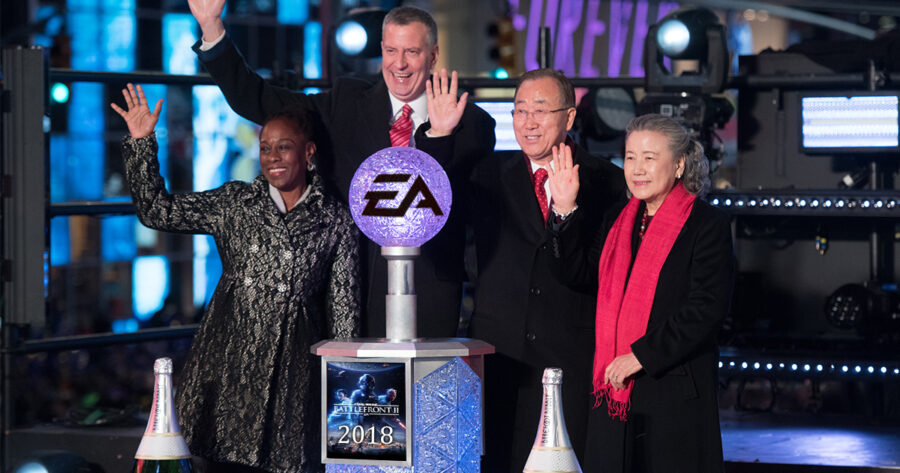 NEW YORK — Looking to further expand their foothold in the culture, EA Studio announced it had agreed to help drop the ball in the Times Square celebration of the new year, 2018.

“When it comes to letting things fall in spectacular fashion, we believe our resume speaks for itself,” said EA CEO Andrew Wilson. “That includes not only EA, but our partner studios, such as Respawn, DICE and Bioware, who are all on board to deliver an epic ball-dropping that fans of EA, especially our Madden and FIFA customers, have come to expect on an annual basis.”

The announced collaboration received mixed reviews with some praising the decision.

“At first I thought it was a bad idea, but then I played ‘Mass Effect: Andromeda,’” complained longtime gamer Anne Biging while throwing her N7 sweatshirt in the garbage. “I realized if anybody is up for the task of causing a massive structure to plummet, it’s EA.”

Others, however, felt a different gaming company might have done a better job.

“The fact Bungie wasn’t asked to do this is a fucking disgrace,” said Reddit user u/deztiny2suxmydick. “The NYE ball falls 141 feet but the height that the people who created Halo fell in my heart is incalculable.”

EA also announced that viewers will be able to experience the ball dropping from ten seconds all the way down to six, but in order to experience seconds five through zero, will need to purchase a season pass.

Otherwise they will be stuck in 2017 until EA turns last year’s servers off, resulting in all participants who haven’t upgraded to 2018 to be trapped in a void for all eternity.