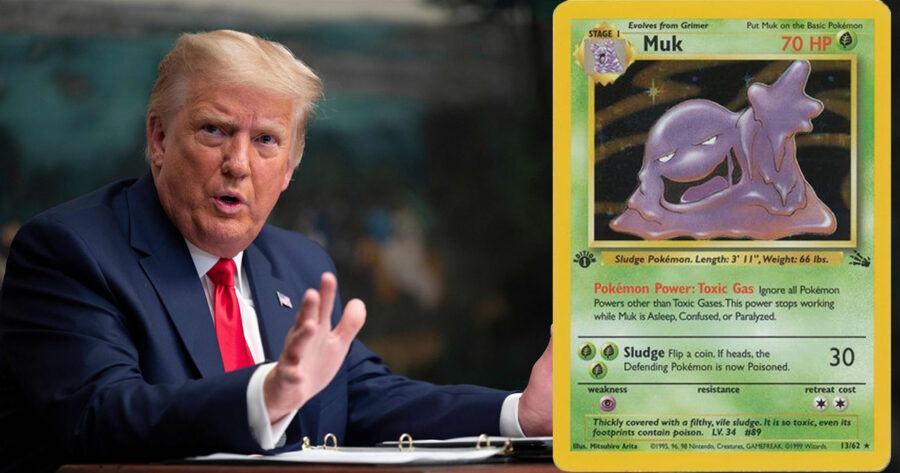 WASHINGTON — Following a string of other legal concessions in the waning days of his term, President Donald Trump announced this morning that he would be withdrawing a decades-old lawsuit against the Pokémon Company which had previously prohibited them from printing cards featuring the toxic sludge Pokémon, Muk, due to its blatant similarity to his likeness.

“A long time ago this Pokeman [sic] Company made a HUGE mistake trying to steal my image for their Mook [sic] card,” Trump tweeted. “I rightfully stopped that 20 years ago, but as a gift to all of my Pokeman [sic] loving supporters, I have decided to allow what everyone agrees is the best Pokeman [sic] to be printed again. Enjoy the Mook [sic] cards, everyone! Big wins!”

However, when reached for comment, Pokémon Company President Tsunekazu Ishihara reported that no such lawsuit had ever been filed and that they had actually never been prevented from producing cards featuring the character Muk.

“As everyone is well aware, the Pokémon Muk is based on Henry Kissinger, not Mr. Trump,” said Mr. Ishihara, pointing to an elaborate cork board-and-yarn diagram outlining every Pokémon based on a person from popular culture. “See, there’s Jackie Chan, Bruce Lee, Uri Geller…many of these references were done out of admiration, and then some were done out of contempt. Mr. Trump is actually the basis for Garbodor, the trash bag Pokémon.”

The explanation by the Pokémon Company has not swayed the minds of Donald Trump’s most ardent supporters in the Q-Anon community, who quickly jumped to link this announcement to the rest of their sprawling worldview.

“God Emperor Trump has done it again with this false swipe at the elite Democratic Conspiracy,” noted 8chan user MoleChild1488 wrote. “Everyone knows that Pokémon is a ploy by Bill Gates to lure 10-year-olds to travel alone so that he can kidnap them and harvest them for adrenochrome, and this move will be super-effective in luring him out of hiding so that he can be caught and left in a box where he belongs. Gotta catch ‘em all! By which I mean the deep state pedophiles, of course.”

At press time, Trump had reportedly also granted forgiveness to Bandai and Toei Animation for stealing his likeness for the talking yellow turd Digimon called Sukamon.