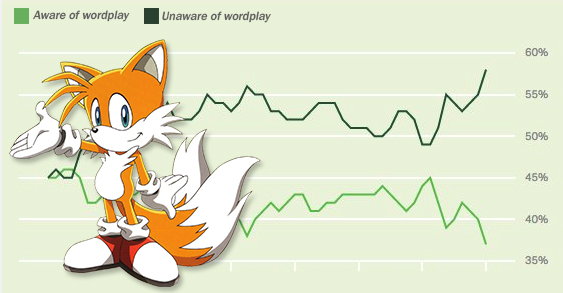 WASHINGTON — A disturbing poll from Gallup about the Sonic franchise revealed that, across all demographics, most people do not know that the name Miles “Tails” Prower is a play on “miles per hour” ever since his creation in 1992.

The poll showed that out of the roughly 12,000 people who participated, 6% claimed to have been aware of the joke prior to being surveyed, while 8% stated they knew that Tails had another name to begin with.

Die-hard fans of the series were appalled by the lack of knowledge amongst the general population.

“It’s just horrifying how few people are aware of this,” said longtime fan Sean Ick. “The education system in the United States is dropping lower and lower in the international rankings. Half of Americans don’t believe climate change is real. And now, worse of all, most people in the country don’t know Tails’ name is a pun. It just sickens me how far we have gotten from the truth.”

Poll participant Tess Low, 36, was among those who hadn’t identified the wordplay.

“It was life-changing when I realized I had been living my whole life not knowing that Tails’ name is a pun,” Low explained to reporters. “I feel like I’ve been only half-living this whole time. Now I can finally be my full self. I can be Tess Low.”

“Oh wait fuck, my own name has been a Sonic pun this whole time too?!”

Reporters followed up with Sean Ick to ask if he thinks people get the joke with Sonic allies Cream the Rabbit and Cheese the Chao, to which an exasperated Ick wordlessly screamed until he passed out.