Dad Too Fat to Cosplay Kratos Teaches Son About Disappointment Instead 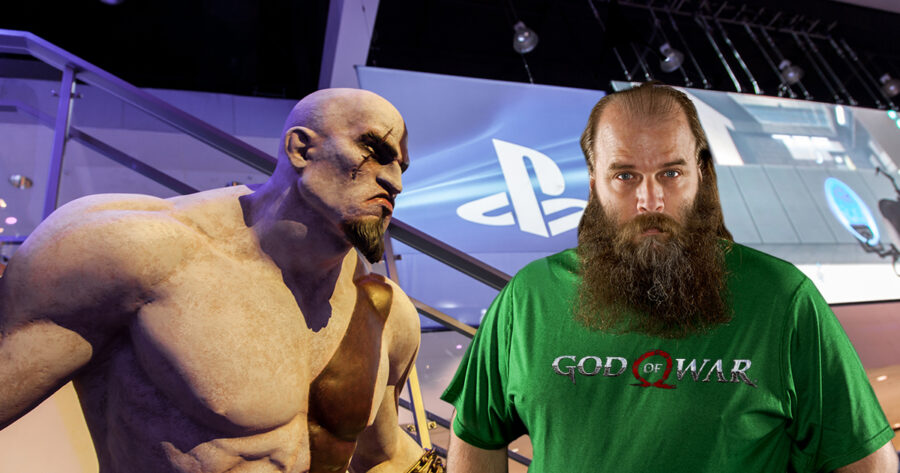 LOS ANGELES — Inspired by a God of War playthrough with his son, Glenn Dabrowski attempt to build on the father-son bonding showcased in the game was derailed after discovering he was too obese to cosplay the titular character at E3 this year.

“We don’t do a whole lot together besides some gaming, so I thought this was a perfect opportunity to teach him the value of our relationship,” said Dabrowski, dejectedly washing off the white paint he had prematurely applied to his body while his son looked on with a faraway look in his eyes.  “Instead, I taught him that those we look up to most can let us down in spectacular ways.”

Not wanting to let this opportunity to go to waste, Dabrowski tried to deflect Tucker’s interest in cosplay onto other games. Tucker’s other favorite game, Fortnite, didn’t have any characters with a relationship on par with Kratos and Atreus. Getting desperate, he suggested a video game duo from his own childhood.

“I thought ‘Mario and Luigi’ would be great, with the overalls and everything. I already got the moustache and overweight physique,” Dabrowski told reporters at E3. “But he said ‘Why can’t you just go to the gym and diet? Kratos would do anything for his family and you won’t even get on a treadmill for me,’ and stormed out.”

Without any viable cosplay alternative, Dabrowski knew he had to have a hard conversation with his son. He explained that heroes like Kratos who can lift boulders, defeat gods and never disappoint their family are fantasy and that trying to emulate them will only lead to failure.

Despite the lecture, Tucker pressed on and only gave up on his Atreus cosplay when he realized the leather belt he bought wasn’t long enough to go around his waist.

“I really think we had a bonding moment going to the mall to return that belt,” said Dabrowski as he ruffled the hair of his downtrodden son.