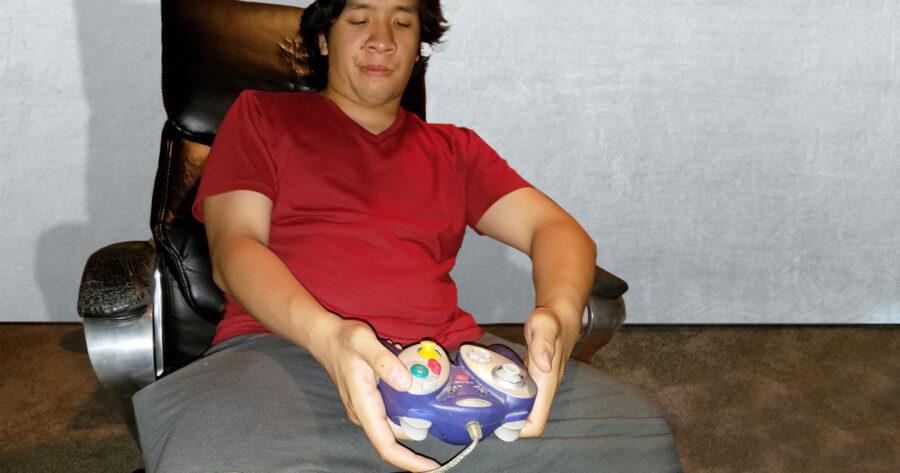 ENOLA, P.A. — Matthew Bowen discovered last night exactly where he stands with his group of friends after receiving the crappy controller on GameCube night.

“It was shocking to say the least,” Bowen said while turning his controller upside down to press the start button. “I always knew Jim and Brad were tight, but they even gave Jim’s little brother a normal controller. And I distinctly remember Jim plotting to kill that kid when he was three.”

Sources close to Bowen’s friends report that they insisted this has been a long time coming.

“It was time; he needed to know,” Jim Sharp said while effortlessly performing a wavedash with Captain Falcon across Final Destination. “I started hanging out with Matt when I had no other friends, but since then, everyone around me has gotten way cooler. Except him. And that’s why he got the controller that looks like it was designed by a clinically depressed Mad Katz employee.”

In addition to the harsh realization, Bowen also reportedly resents the manner in which it occurred.

“Why’d they have to give me this controller? It’s insulting,” Bowen said in an interview after the gaming incident. “There’s nothing that says ‘I do not truly respect you as a friend’ like giving me a controller that looks like it was made by an alien trying to explain human video games to other aliens.”

Bowen continued, growing more and more angry as he discussed the different variations of distorted GameCube controllers available him.

“They gave me a few options, actually. One looked like a keyboard that threw up on itself and another looked like the controller was trying to rip itself in two.  How are so many companies bad at making controllers? I’d take a fucking Rock Band drum kit over any of these. At least then I’d have something to do while sitting dead last in Mario Kart.”

Bowen’s mother revealed that this is not the first time her son was unaware of his social standing.

“We always loved him the least,” Janet Bowen said. “We tried everything to let him know. When he wanted an MP3 player we got him a Zune. When he asked for Dr. Pepper, we bought him RC Cola. We even tried giving him hand me down clothes—and he was the oldest! But our poor little Matty never got the message.”

When asked if Bowen plans to leave his friend group upon this realization, he shrugged and said “I’ve accepted that I am the human embodiment of a Neo Geo so I might as well stick around with these guys.”