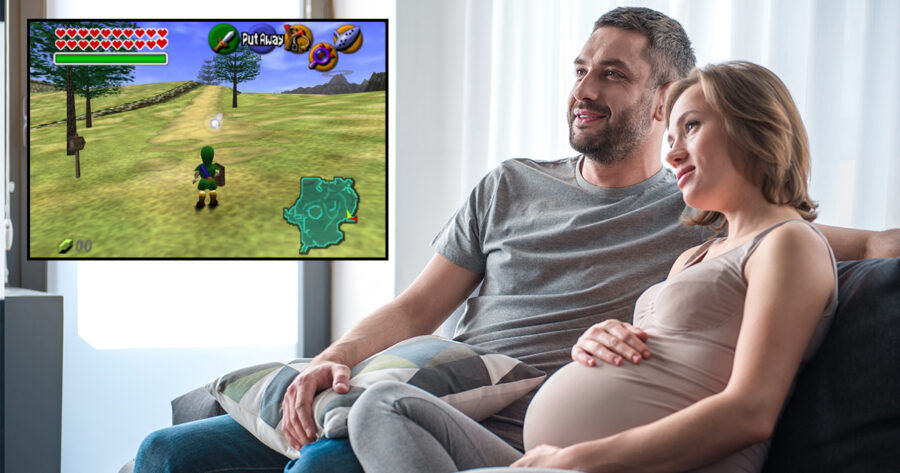 CINCINNATI — Newly expecting couple Darren Herzberg and Emily Snyder are excited for childbirth purely to gain a new person they can force to play Nintendo’s seminal classic, The Legend of Zelda: Ocarina of Time, sources close to the couple reported.

“Sure, it will be cool to start building a family together,” said Herzberg, who was busy constructing a Forest Temple-themed baby room complete with stuffed Skulltulas and a mobile of Poes to dangle above the crib. “But mostly, we’re beyond excited to start building the next generation of Zelda fans. We can’t wait for our kids to play the best game of all time — a true masterpiece that will never be surpassed — while we watch, give them tips, and talk to them about how the game transcends art and life itself.”

“Frankly, we had run out of friends to force into playing Ocarina of Time,” Herzberg continued, “but that’s when we realized, like starting a new save file, we could just make more.”

Close friends of the couple say that Zelda fandom is a recurring theme of the couple’s relationships to one another and their friends.

“Yeah, I guess they’re pretty into Zelda,” said Zach Cheevons, who hung out with Darren and Emily a lot more before they forced him to play Ocarina of Time while they watched. “I mean, I guess it’s a classic or whatever. It’s just kind of hard to enjoy something when someone forces it on you. They would just keep insisting that I would love this part, and the puzzles in that part are amazing, and they would continually shush me to listen to the game’s music by Koji Kondo but then they’d just start shouting over the music to say what a total genius he is.”

“I guess it’s harder to get someone into it when they’ve already lived a whole life and don’t look to you for survival. That’s where the baby comes in.”

The couple was reported to have expressed excitement to weary family members about “seeing the baby complete their first speed-run,” and “whether they’ll catch the Hylian Loach.”

“I’m so excited my sister is having a child,” said soon-to-be-aunt Marjorie Snyder, “but I’m really not looking forward to the ‘console-reveal party’ they’re planning and I don’t know where to buy a cake with filling that represents either a GameCube or a Nintendo 64. The only instruction I was given was to not get a 3DS cake, whatever that means.”

At press time, the couple was in the process of setting up a new Ocarina save file for their expected child, only to realize on the name-entry screen that they hadn’t yet discussed baby names.