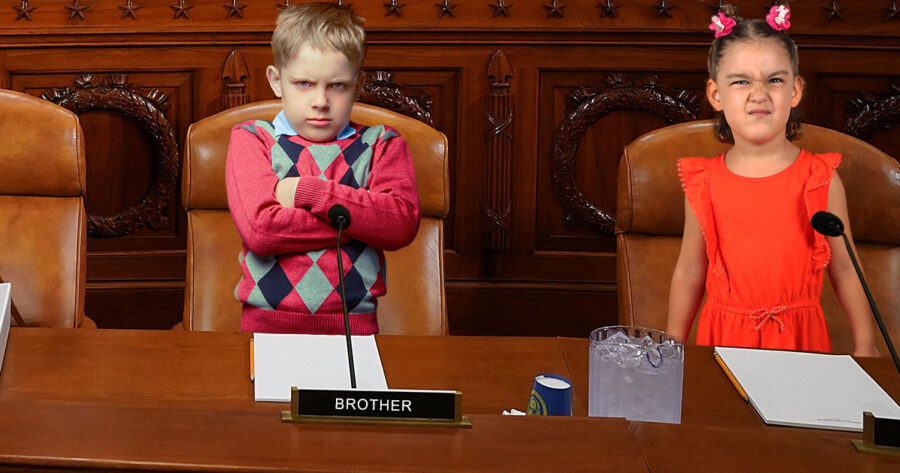 LAKE WOBEGON, Minn. — The Council of Siblings began an intensive investigation after a stunned household reeled collectively as Brendan Gunderson’s Horizon: Zero Dawn save files were erased from the family PlayStation 4 earlier this week, sources have reported.

Brendan, age 11, was hoping to get some playing time in before family dinner when he discovered the egregious crime.

“I don’t understand how something like this could happen,” he said in front of the council.  “We have different profiles, for Christ’s sake! I demand justice for this horrible act!”

#DeleteGate, as the incident has come to be called, has since become the source of terrible tension in the Gunderson household, prompting Mrs. Angela Gunderson to call an emergency sibling council meeting. Utilizing her matriarchal authority, Gunderson has put into action a progressive plan that has received mixed reviews from her constituency.

“Figure it out yourselves you guys,” she said, according to those close to the case. “I’m getting real sick of hearing you bicker over that stupid game, and if you can’t figure it out, I’m taking it away and nobody gets to play. Or do you want me to get your father?”

Todd Gunderson declined to comment further on his wife’s decision, stating that he’s got more important things to worry about, like “putting bread on the table,” and supporting the Minnesota Vikings.

The council is comprised of the 5 members of the Gunderson Sibling Committee: Andrew, Tim, Jessica, Bradley, and Brendan. Of all the members, Jessica Gunderson, age 15, was the most outspoken in her opposition of the investigation.

“This is stupid. I don’t even like that game,” she said. “It was probably Tim, anyway. He’s the one that screwed up dad’s fishing pole playing lightsabers with the neighbor kids; it wouldn’t surprise me if he was the one that deleted it.”

The Council of Siblings have begun preliminary hearings and is set to begin its official investigation after the dishes have been put away, and when Brendan stops pouting over his “little game.”