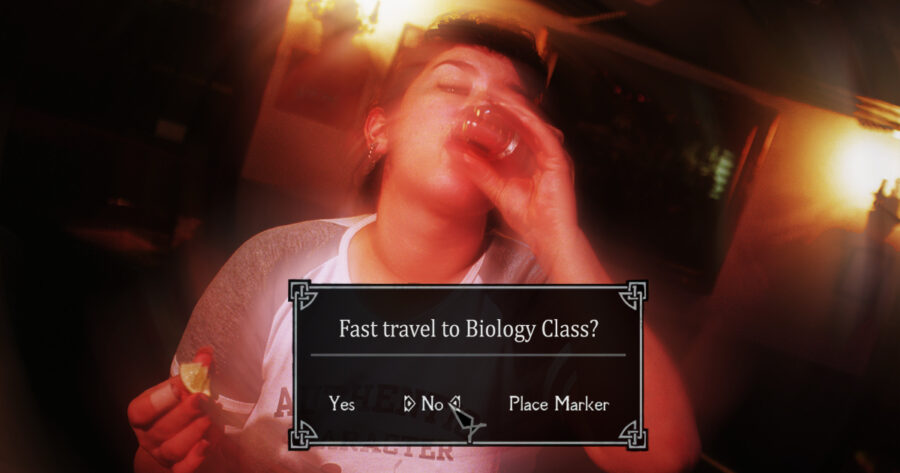 Upon finishing the drink, Stevens was supposedly wrapped in darkness, only to wake up on her carpeted floor having lost all her gear except for her underwear 10 hours later.

According to those close to her, Stevens says her fast travel ability can bring her home from any on-campus party, be it a frat or in a neighboring dorm.

“I’ve spent my whole life walking home from events, but now it’s like, ‘wow I can get home whenever I want,’ you know?” said Stevens in an interview.  “I would have stopped doing it if the parties weren’t on the other side of the campus. All the backtracking is just tedious.”

Despite the clear gains of her new found ability, Stevens emphasized some drawbacks.

“The Tequila bottle acts as a one-time-use consumable, so you’ll need to stock up if you want to do this regularly. You also can’t carry any cash because apparently it costs all your money,” she complained to the press.

Despite the glowing reviews from Stevens, sources close to the friendship state that Stevens’ roommate Marla Kraushaar is not as fond of the new fast travel ability.

”As soon as she learned to black out, she seems to have lost the patience of walking home regularly. Now every night out ends with a bottle of Tequila and us having to carry her home while she shouts ‘Fast Travel!’ repeatedly in between bouts of vomiting,” said Kraushaar. “She is missing out on the journey back home that is half the fun of going out to party.”

“Also there’s nothing I hate more than traveling with unresponsive companions,” she added.

However Stevens disagrees with her roommate and claims the talent makes it more worthwhile for her to go see new places.

”Over the summer I learned it can bring me home from beach parties!” she exclaimed to reporters. “Assuming I’ve brought my car along, of course.”