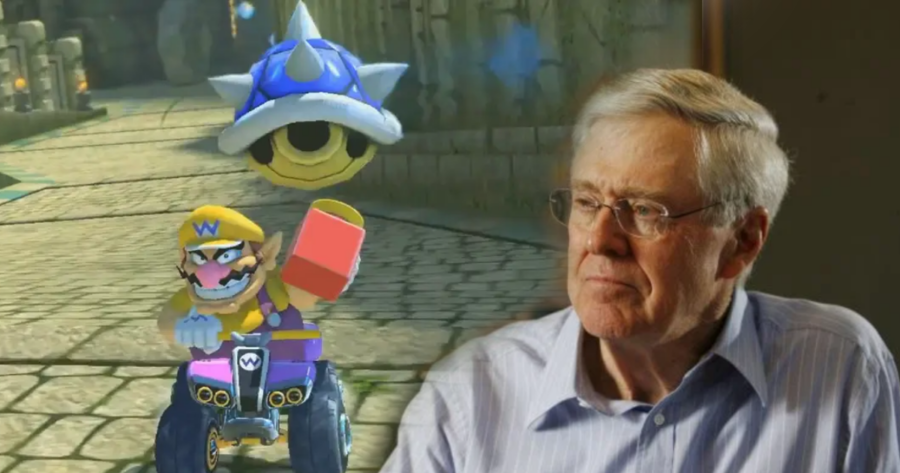 CAMBRIDGE, Mass. — Billionaire owner of Koch Industries Charles Koch recently gave a two-hour symposium at his alma mater MIT that questioned the mechanics of the game Mario Kart, specifically why a character in 1st place can’t also get a blue shell.

“As someone who has earned 1st place, it makes no sense that I don’t have access to the most powerful powerup in the game,” Koch remarked while presenting one of several dozen slides from his coinciding PowerPoint.

Koch then argued that having the blue shell would not only help him, but ultimately help those closest behind him, mostly by slowing down the weakest players even further.

“It would benefit everyone for me to not only remain in the lead, but also have a blue shell that strikes the person ahead of me, who happens to be in last place. This will allow me to lap those who have failed to improve their position in the race. This has a trickle down effect, allowing other racers to get further ahead as well,” Koch explained. “Just not as ahead as I would be.”

He went on to question why the blue shell was given to the slowest racers in the first place.

“The slobs towards the end of the pack are the only people given an opportunity to use a blue shell, which is directed specifically at the racer in the upper cla—,” said Charles, and then cleared his throat. “Excuse me. I meant 1st place.”

Koch carried on, presenting a slide that showed a hand-drawn picture of a Goomba wearing a pot leaf shirt, lazily tossing a blue shell at a golden Mario.

“These lazy, do-nothing racers are given this unfair advantage in spite of missing every speed pad and turbo jump. It just … honestly it just plain sucks. You can’t dodge that shit and I really wanted to win,” Charles told the packed auditorium, his face turning red. “My granddaughter could barely stay on the track, but she hit me with it and won. She’s four years old!”

When asked for her thoughts on the presentation, MIT student Trish Walker said the event took a turn for the worse after that moment, with Koch continuing to rant about blue shells, lightning bolts, and communism for two hours.

“I thought the blue shell thing was an allegory or something, but it became clear after about 15 minutes that the guy actually has issues with that powerup.”

Koch also announced he would be creating a Super PAC called First Place Patriots, whose goal is to lobby Congress to make it illegal for granddaughters to gloat after winning Mario Kart.