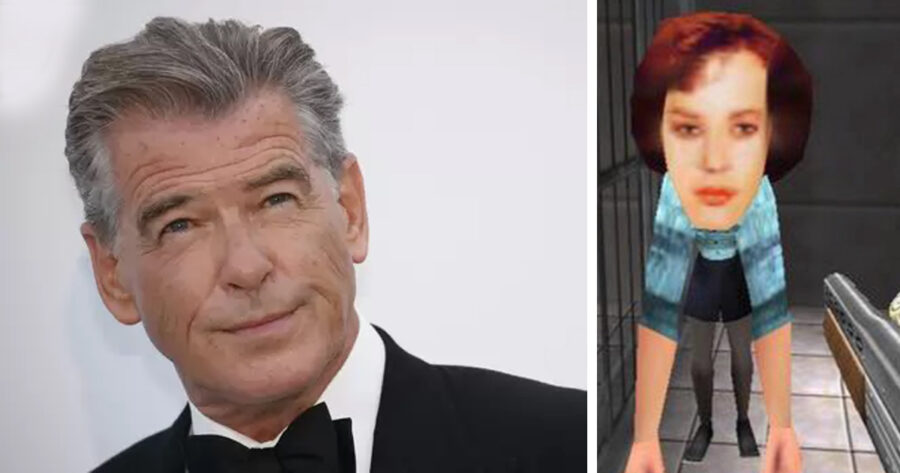 MALIBU, Calif.  — In an act of radical body positivity being praised by fans online, James Bond actor Pierce Brosnan was photographed by paparazzi outside of his house while in GoldenEye 007’s “DK Mode.”

Despite popular standards of beauty and the lingering social stigma towards public figures who choose to openly enable DK Mode, Brosnan claims he is ready to stop caring about what the world thinks about his artificially gigantic head and long forearms, which he originally showed off in the classic Nintendo 64 shooter.

“I don’t care what the world thinks. Donkey Kong is beautiful and so am I. It’s 2019, let’s stop living like it’s 1997,” said Brosnan as he cranked the volume on his boombox, blasting a mashup of the 007 theme and the “DK Rap” to passersby.

Despite the support from fans online, some people are not on board with Brosnan’s controversial decision. Polls say 39% of Americans think Brosnan is perpetuating a harmful lifestyle.

“Ain’t no son of mine gonna leave this house lookin’ like no goddamned Donkey Kong,” said Texas resident Mike Morton. “He’d be a walking target! What if someone sneaks up behind him and blasts him with the Golden Gun? It’s sick.”

61% think the move was a beautiful and progressive gesture, which may encourage society to become more accepting of other body-modifying cheat codes in the future.

Despite the negative opinions of many, Brosnan says his tiny little legs are firmly planted on the ground, and his extremely huge head is in the clouds. Leaving the house was only the first step in his long journey promote higher self esteem and self worth, no matter what special mode you have turned on.

When asked if he would consider publicly embracing other modes in the future, Brosnan coyly pointed out that he’s had “Slappers Only!” enabled for years.