If Birdo Isn’t a Woman, How Come I’ve Been Threatening to Assault Her? 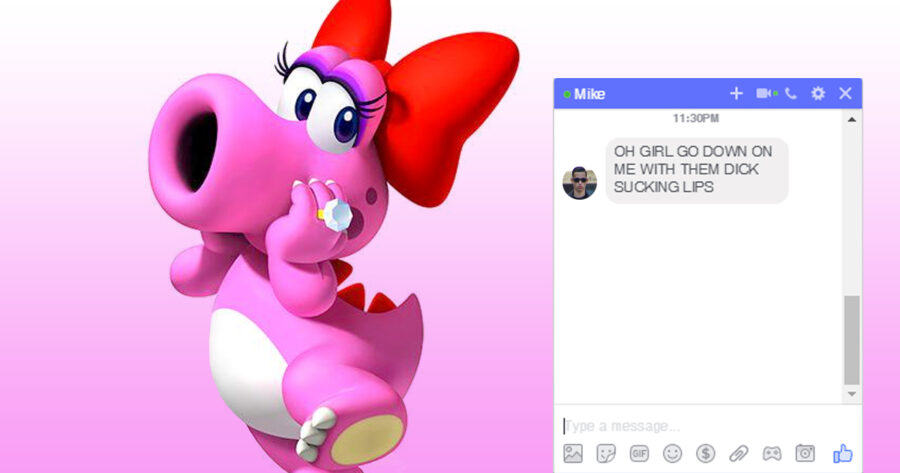 There’s a lot of debate in the video game world about Birdo’s gender identity. Birdo is described as male in some game manuals, female in others. Well, good news, Nintendo super fans! I’m finally putting this debate to rest.

I’ve found indisputable evidence concerning Birdo’s gender: Birdo is a woman because I keep threatening to assault her.

The first piece of evidence that Birdo is a girl came on June 22, 2016 when I tweeted at her “I have something to put in that thing that might be a mouth!”

Now I’m not actually sure what that hole on Birdo’s face is, or whether or not I have something to put in it, but the fact remains: I tweeted a vaguely threatening sexual thing at Birdo which means she must be a woman. This is simply scientific fact.

In addition to this, on September 2, 2016, I Facebook messaged Birdo “I’m gonna use that giant bow as handlebars when I ride you in the sack you big mouthed bitch!” Now I’m not sure what sex acts are possible or if Birdo is a marsupial and therefore has two vaginas like a kangaroo.

But the fact that I sent this message at 3am and followed it up by sending “Hey…hi…hey…hi…u up?…hi…” every night for a year is a pretty strong indicator that Birdo is female.

Just think about the facts: I wouldn’t send those messages to a man because I have no obsessive desire to fuck men. Birdo, on the other hand, I spend every waking moment dreaming of drilling her so hard she just starts shooting eggs out her mouth uncontrollably.

So she has to be a woman.

And finally, the last nail in the coffin that is the ‘Birdo’s gender’ debate: I sent Birdo an email on her private, personal account that read “I am going to find where you live, come dressed as Mario and say ‘Alright you little slut it’s a-me, a-Mario and I am going to use your mouth like a warp pipe for my a-dick.’”

Now this is just a flat out stalking and assault threat as well as some flimsy roleplaying at best. It’s horrifying. There’s no way the recipient of this message would not be female-identified. Birdo is a woman. Case closed.