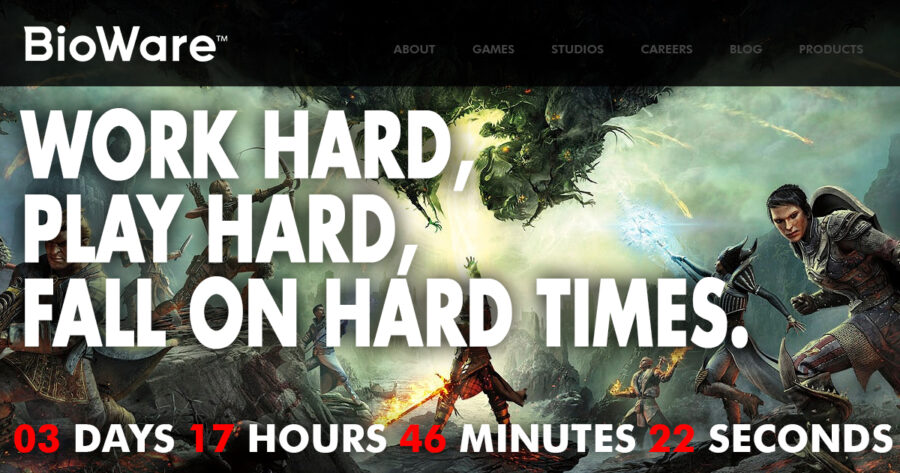 EDMONTON, Alberta — BioWare revealed today that a mysterious countdown image which has adorned its website for the past week has in fact been ticking down to a round of company layoffs.

“We’ve been thinking about how we announce these kinds of difficult decisions,” explained Electronic Arts CEO Andrew Wilson. “So when it came time to eliminate these three hundred positions from our BioWare division, we asked ourselves, ‘How can we make this more fun for the fans?’”

The resulting image, which fans quickly identified as depicting the character Fenris of Dragon Age fame, began largely obscured by shadow, save for a stylized counter in the corner. Over the ensuing days, however, the image has gradually brightened until yesterday a piece of parchment appeared in the character’s hand with an initial list of thirty names. Over the next several days, the names of more terminated employees will appear on the slip.

“No, we didn’t know about it either,” said an agitated Brennan McCarren, a now-former scenario writer for the studio whose name is near the top of the parchment. “Now will you get out of the way? I have five minutes to stuff as many mugs into this bag as I can before security walks me out of the building.”

Fans of the troubled studio took to Twitter to express solidarity with employees, many of whom are now updating their resumes.

“We have nothing to announce at this time regarding our Dragon Age and Mass Effect properties,” Hudson said in a statement. “However, we are pleased to announce that we’ve refocused our efforts on the development of Anthem 2, and that we will be bringing the long-awaited Sonic Chronicles: The Dark Brotherhood 2 to market in time for the holiday season.”

Fans are eagerly checking BioWare’s website as the timer continues to tick down, with a banner on the front page promising that the site will soon feature exclusive video clips of the laid-off employees crying while packing up their desks.