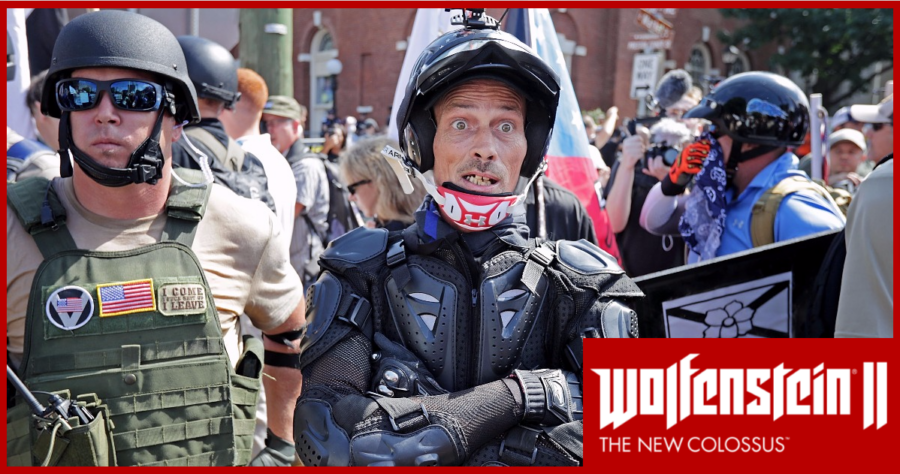 “Holy shit, we are so fucking sorry,” Bethesda’s Pete Hines said in a frank statement issued earlier today.  “What were we even thinking? Jesus fucking Christ.”

The Wolfenstein series is set in a reality in which the Nazis won the second World War. It’s up to the player, through lead character B.J. Blazkowicz, to fight back the Nazi swarms on American soil.

“In the pitch meeting we were like ‘Hey, what if there were a bunch of Nazis in modern America?'” Hines explained, shaking his head. “The plan was there would be a ‘Nazi’ rally and people who pre-order Wolfenstein II: The New Colossus would earn multiplayer weapons skins and other rewards by taking part in an augmented reality game, identifying Nazis from photos posted to news sites on Twitter.”

Hines continued, “We are just really, really sorry about how this turned out. We started off by saying there’s no bad ideas in brainstorming, but…. Yeah this was a terrible idea.”

One player, who wished to remain anonymous, expressed their disappointment in Bethesda, saying “I took half a can of mace to my face and now they’re telling me I can’t get the special Platinum Trophy in the PS4 version of the game because it pissed some people off?”

Bethesda promises in spite of the “disaster” that was its augmented reality game, Wolfenstein II “packs more weapons, excitement, and skull-cracking action” than ever before.

Hines ended the statement optimistically, saying “In spite of our disastrous promotional campaign over the weekend, we’re still sending copies to your favorite YouTube influencers, like PewDiePie and JonTron before release, to get their thoughts on this blockbuster game.”