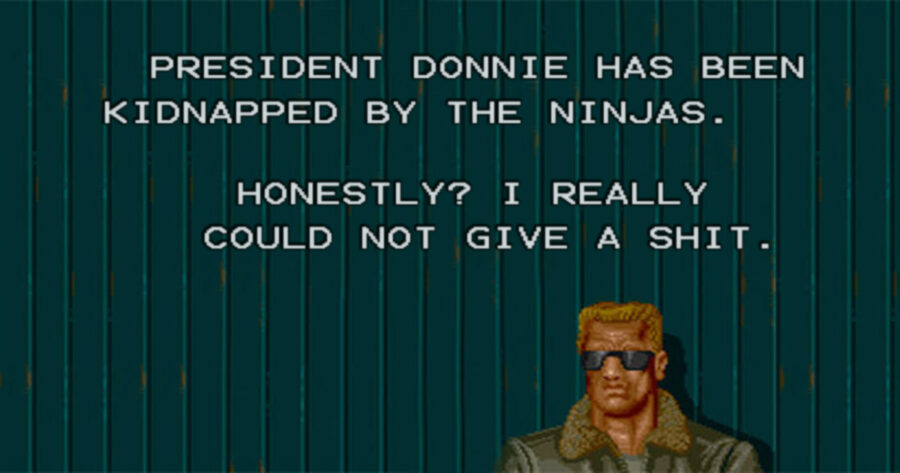 “You want me to say it? Fine: We are not bad enough dudes to rescue President Trump,” said a frustrated Blade. “There. Jesus.”

The famed Bad Dudes were widely lauded for their daring rescue of Ronald “Ronnie” Reagan from the DragonNinja in the mid 1980s. Leaked documents suggest Trump was stolen out of a Mar-a-Lago suite by that same DragonNinja earlier this morning.

“I didn’t even think of my job as political, but then 45 came along and all decency is off the table,” said Striker during today’s press conference. “Destructive executive orders, constant foreign policy blunders. He’s set this country back decades. Even today’s kidnapping is just a rehash from something 30 years ago.”

“We’ve killed thousands of ninjas with our bare hands, but that’s nothing compared to the slaughter a full repeal of Obamacare would create,” noted Blade. “I am a big and buff Bad Dude who ain’t afraid of squat, but I could never help bring a healthcare repeal upon the people of this country.”

The muscular martial arts duo emphasized that they were aware that president Reagan was not without controversy during his administration, and defended their previous actions.

“Look, it was the ‘80s,” said Striker.  “Things were simpler then. Save the president, get burgers, do some blow, call it a day, alright?”

The Bad Dudes also expressed worry that the Kremlin may be involved in the kidnapping, and that they wanted to avoid any sort of foreign policy disaster. “This ain’t Rush’n Attack. This is serious,” they added.

At press time, Secret Service agents were also seeking “a bad enough dude” to rescue Eric Trump from the banister of a White House staircase.