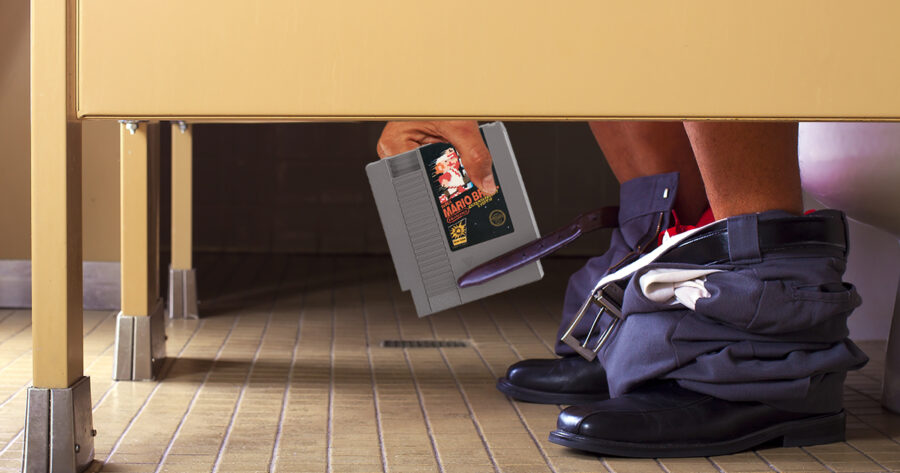 “I went in there, and as soon as I sat down I heard the guy in the stall next to me huffing and puffing,” said security guard Jeff Bowman, who discovered the scene during a break. “I didn’t know what was going on except that I was sure it sounded inappropriate. Then I heard him yell an obscenity and a copy of Super Mario Bros dropped on my foot. You see kids and addicts doing this kind of stuff in here, but I never expected it to be such a vocally anti-gaming Republican Senator. I asked him if he wanted the cartridge that he dropped back and he just yelled something about not being a gamer and ran out.”

When news of the incident became public, the senator held a press conference to address the allegations while taking excessive sips of water.

“I am not a gamer, I have never been a gamer.” said the senator while dabbing sweat from his forehead. I found that copy of Super Mario Bros on the floor of the restroom. Once I realized it was a video game I started hyperventilating because I know how dangerous those damn things can be. I tried snapping it in my hands right then and there but it slipped and I dropped it on the floor. I left the bathroom once I saw a security officer had picked it up, and I thought I could trust him to dispose of it, instead he spread baseless rumors. We need to focus on the real problem here, and that is the threat of video games corrupting the youth.”

Shortly after the press conference concluded, pictures of the senator playing Pokémon Blue with Jeffrey Epstein via a link cable surfaced. The senator refused to comment on them.