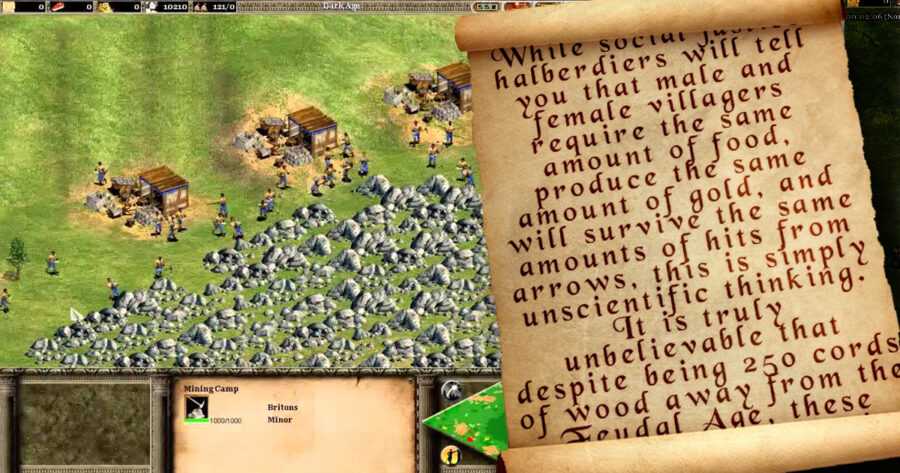 TEUTONS VILLAGE — An internal memo written by a Teutonic gold miner to his king arguing that male villagers are inherently more productive than their female counterparts has caused chaos among the small farming community.

Though it is unclear how the memo was written given that miners work without breaks until they die, the documents has caused massive outrage. Female miners have debated a strike until the miner in question is fired, a shocking result for employees who are so used to a toxic work environment that they often work while being stabbed by cavalry swords.

A review of the document’s main arguments reveals the source of their anger.

“While social justice halberdiers will tell you that male and female villagers require the same amount of food, produce the same amount of gold, and will survive the same amounts of hits from arrows, this is simply unscientific thinking. It is truly unbelievable that despite being 250 cords of wood away from the Feudal Age, these kinds of beliefs persist,” the manifesto begins.

Though it claims to be a scientific document, critics argue that the memo consists of nothing more than misogynistic workplace complaints that show a clear lack of points being spent in research. In one oft-cited passage, the author speaks of women trying to innovate rather than mindlessly pickax.

“We had a former lumberjack woman come to our camp and complain about carrying rocks. She said that the logging crew had begun to use wheelbarrows and wondered why we weren’t. Do you know how much research it would take to adapt wheelbarrows for mining? We don’t have enough food for that kind of nonsense, especially after we got attacked by three crossbowmen last week and had to use our resources to build more walls.”

“Of course a woman would lack the rational reasoning to see that,” he added.

According to those close to the village, some fellow male miners spoke out in support of the memo anonymously.

“I’m just saying you don’t see any female Teutonic Knights around,” he said, adding, “Maybe it is because of a combination of patriarchal and cultural forces guiding women into stereotypical roles or maybe I am just their biological superior due to evolution and my penis.”

At press time, the memo was thrown out and the miner fired by the King who simply stated, “You all have the same shitty stats, dumbass.”