Activision Blizzard CEO Cancels All Microtransactions After Being Visited by 2 Free Ghosts and an Additional Ghost for $3.99 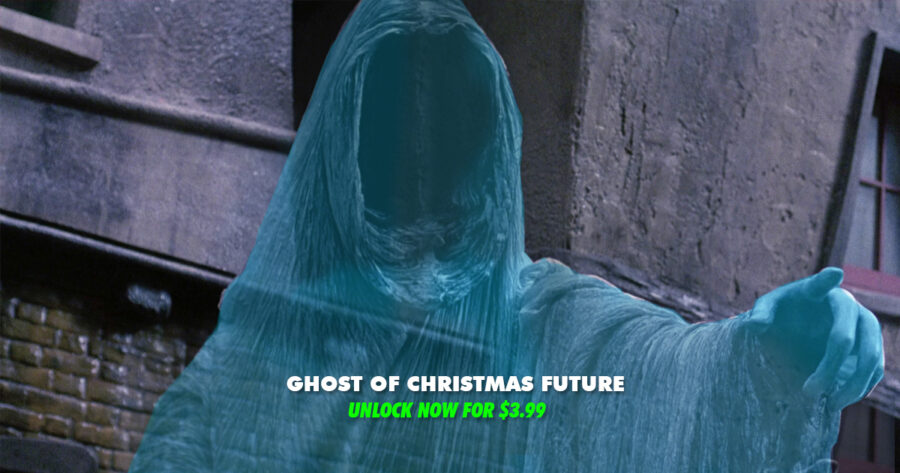 When Activision Blizzard CEO Bobby Kotick awoke, it was so dark, he could scarcely distinguish the transparent window from the opaque walls of his chamber. His eyes darted to and fro in the blackness, until the haptic alarm on his Apple Watch notified him four times of the hour. To his astonishment, the alarm continued from four to five. Seven to eight, and regularly up to twelve.

“This is not how an Apple Watch works!” Kotick exclaimed. “Why, it must be low on battery. Curse this battery life! It is far less than promised during Tim Cook’s presentation.”

He encumbered to remove the Apple Watch and place it on the wireless charging station on the nightstand next to his bed, when it vibrated once more. Suddenly Kotick remembered the warning from Marley’s ghost.

“As a tribute to our hardcore fans,” he recalled, still unnerved by the apparition of his old friend, “we will be releasing our first two ghosts to you for free.”

The curtains of Kotick’s bed were drawn aside by a hand, not unlike the hand of a child. A strange figure stood watch over him, clutching a bough of holly in its hand, wearing a dress trimmed with exclusive content from DLC packs long gone. Around its neck hung a 2013 Activision employee edition gold Fire Kraken Skylander.

Kotick stared at the apparition. It was both there and not there, like the chill of a windowpane frosted from winter’s cruel clutches. Time crawled slowly by, with nary a sound save the battering wind against the stucco finish of his opulent home.

A hollow sound welled up from the childish apparition, beginning like the whistle of a steam kettle, but becoming almost melodic, as though the voice were singing to him, but tunelessly.

“Kotick,” it said, sending shivers down the old git’s gnarled spine. “I am the first half of the first part of the first content pack for your life’s direction,” it said.

“Then what Marley said is true?” he managed to squeak, half angry, half afraid. The spirit nodded. “The second half is also here with me.”

“Hello!” spoke the spirit of Christmas Present, appearing behind Christmas Past. “I have excellent news, Robert Kotick. I’m available immediately for anyone who preorders the Ghost of Christmas Future,” it explained.

Suddenly the chamber grew colder than it had been before. The flickering candle on Kotick’s nightstand extinguished without explanation, sending white curls of fine smoke rolling into the air. The two spirits looked at Kotick, who cast a most pitiable figure against their unnatural forms.

“This is an exclusive look at the Ghost of Christmas Future,” the second ghost explained. “Please note, some features are still in beta, but all visions of your damnable future are done in-engine running on modern hardware.”

Kotick saw suddenly before him a deep hole beneath a tombstone. The stone was like so many others, at first Kotick was not sure what the point of it was. It was then, with revulsion, he saw the name on the stone was his own. For only $3.99, he could see himself in the tomb, or $5.99 if he waited until after January 31.

“Spirit!” he cried, tight clutching at its robe, “hear me! I am not the man I was. I will not be the man I must have been but for this intercourse. Why show me this, if I am past all hope!”

For the first time the hand appeared to shake.

“I will honor Christmas in my heart, and try to keep it all the year!” he begged. “The Spirits of all Three shall strive within me as part of a persistent experience with regular patches! I will not shut out the lessons that they teach. Oh, tell me I may sponge away the writing on this stone!”

Holding up his hands in a last prayer to have his fate reversed, he saw an alteration in the final content pack’s hood and dress. It shrunk, collapsed, and dwindled down into a bedpost.

Kotick realized he was still in his own bed! “Heaven, and the Christmas Time be praised for this!” he shouted, leaping to the window and throwing it open. On the street below, he spotted an urchin shuffling past.

Kotick reached into his coin purse, fishing out a sum of money.

“On this most delightful day, I ask of you this, my good boy: go down to the market and find me the biggest Christmas goose of all!” He tossed the money to the boy who caught it in his filthy hands.

“But what if there isn’t enough money?” the boy asked. Kotick laughed.

“There’s more than enough there! Buy as many loot boxes as you can. Certainly one of them will contain a Premium Platinum Goose. You’re welcome to keep all the other cosmetic upgrades and skins!”

And with that, the boy ran off, and from that day onward it was always said of Kotick, that he knew how to keep Christmas well, if any man alive possessed the knowledge.