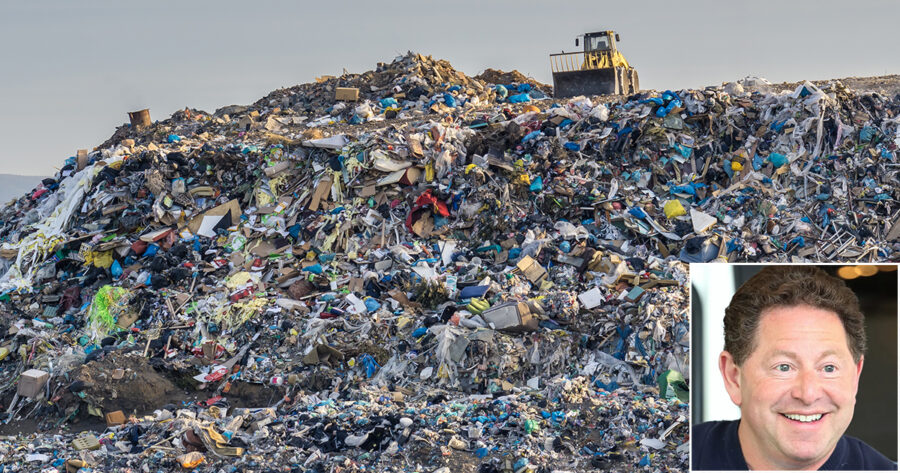 SANTA MONICA, Calif. — The executive board of Activision Blizzard has reportedly voted to bury controversial CEO Bobby Kotick in a New Mexico landfill, sources have confirmed.

“Final vote is 8-3, that does it, Bobby’s goin’ in the landfill,” said Charles “Hoss” Schnuck, reading the board member’s decision out loud. “This board hereby declares that Bobby Kotick will be bound, sedated, and immediately shipped to New Mexico where he will be buried and may no longer give us any headaches. We stood by Bobby at first, but it’s getting pretty tiresome. People were mad when we didn’t vote to remove him, but we think this will get people back on our side.”

“We got the idea from Atari when they buried all those E.T. cartridges out there in the ‘80s,” he added.

Kotick has been embroiled in controversy in recent years, most prominently stemming from a damning Wall Street Journal report that alleged he was aware of a toxic culture of abuse and harassment and Activision Blizzard and participated in it as well.

“Wait, they can’t really bury me in the desert, right?” asked Kotick, as he was being led away from the chamber meeting by hired security. “But I’m still in charge around here! Ask any of these fucking idiots who’s in charge and they’ll tell you, it’s me, Bobby Kotick! Get this bag off of my head this instant.”

Gamers everywhere were delighted by the news of Kotick’s impending burial.

“Wow, that’s the first thing Activision’s got right in a minute,” said Amber Pritchard, a gamer that’s been hesitant to support the company’s titles as of late due to Kotick’s continued involvement. “And the fact that they’re doing it in Alamogordo is a nice little nod to the video game history of New Mexico. Great move, Activision. The only thing I’d change is I wish I could buy tickets to watch that cocksucker go in the ground with my own eyes! Haha.”

As of press time, the board had reconvened for an emergency vote to determine whether Kotick would be dead or alive when buried.