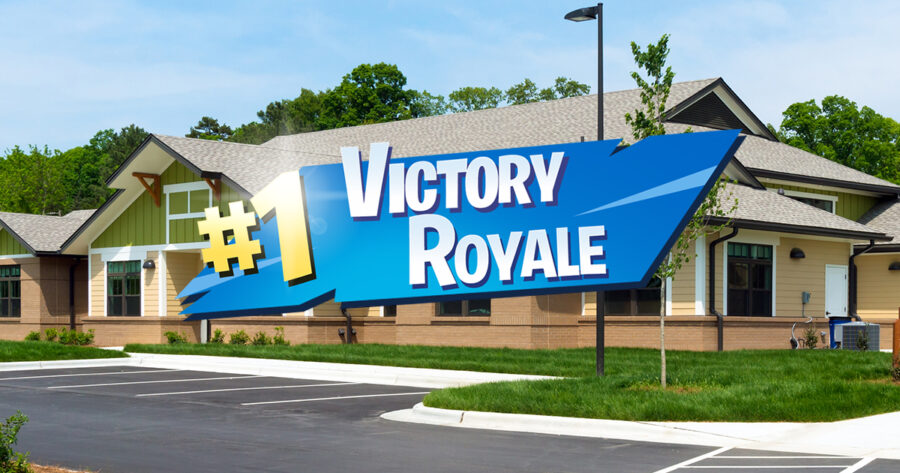 BOISE, Idaho — Tragedy has struck a Heartline Rehab Center, where ninety-nine children, of one hundred who were admitted for addiction to the video game Fortnite, have been found dead in an apparent mass murder.

The conflict reportedly began as the group of young patients, who had been stripped of all electronic devices, were being transported to the facility.

“As I was driving up to the building, I looked in my rearview mirror and saw all of the children leaping out of the windows,” the facility’s bus driver explained. “I yelled for them to stop, but they just kept thanking me and jumping out. I’ve never seen anything like it.”

The violence reportedly started immediately after the intake process, with reports indicating that several children fist fought each other to the death, while others scoured the building for weapons, of which there were none. Police noted that at least five bodies were found crushed underneath fallen trees.

“The staff tried to stop the fighting, but that just kept making it worse,” said Maggie Dobson, a counselor at the facility. “We formed a barrier around the kids and started herding them to the main lobby, but the closer we moved in, the higher the body count got. It was horrific.”

The harrowing twenty minute ordeal ended when the last two victims plummeted from the roof of the building after trying to scale a stack of furniture they’d amassed throughout the conflict.

According to investigators, only one survivor was discovered at the scene: 8-year old Joey Conner, who was found “flossing” in a storage closet.

Based on hours of questioning with Joey about who instigated the tragedy, local law enforcement have announced that they have a suspect, and have asked anyone with information about an individual named “Yeet” to come forward.