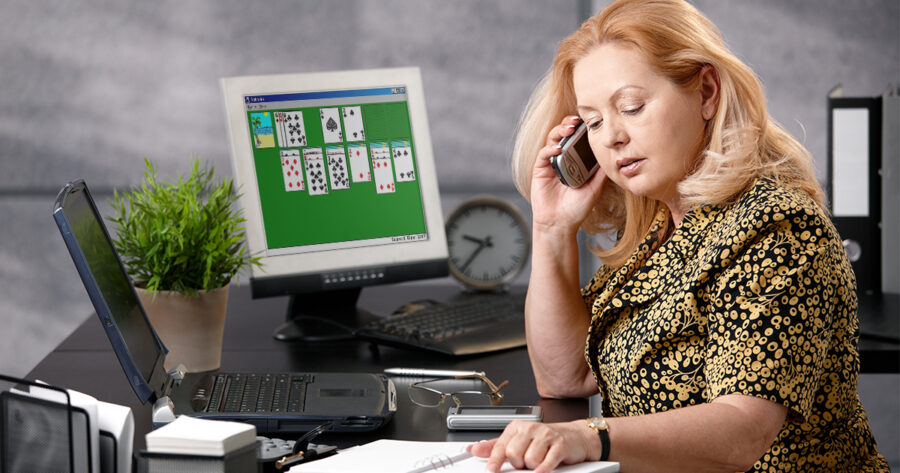 “Yes, I nearly always have a game [of solitaire] open on my screen,” said Norman, longtime Undergraduate Administrator for the Texas A&M Physics Department. “I don’t really do too much during the summer months when the kids are away. Just payroll and a few emails every day. So I try and pass the time.”

By some estimates, Norman regularly clocks in over six hours of solitaire a day, comparable to the time spent in team practices by professional players of DOTA and Overwatch during pre-season. Spectators often awe at the professional admin’s scorching 52-clicks-per-minute playstyle.

“It’s like a 6th sense she has. She’s making moves I don’t comprehend,” said up-and-coming Twitch streamer and college sophomore TexasXSniper15. “I met Joan last year during orientation. It’s amazing someone can make stacks gaming at her age. I make $100 from subscribers every month. But she’s pulling in five figures a year from what I understand.”

“You want me to explain my — what did you call it — my ‘gaming rig?’” said Norman, asked to describe her solitaire PC setup. “It’s a school-issued computer with Windows 95. ‘Gateway’ it says on the side. From 2002. The IT folks say they can’t upgrade it because newer operating systems can’t talk to our payroll server.”

“Oh, and I used to have a silver mouse I liked quite a bit, but we lost that during the move between floors years ago,” added the professional gamer.

Despite conquering Windows Solitaire, Norman has been unwilling to test her skill at any other games. “I opened Minesweeper up once but it seemed too complicated,” she said. “All those squares and no instructions.”

At press time, rumors are circulating of a possible sponsorship deal between the senior Norman and Werther’s Original hard caramel candies.