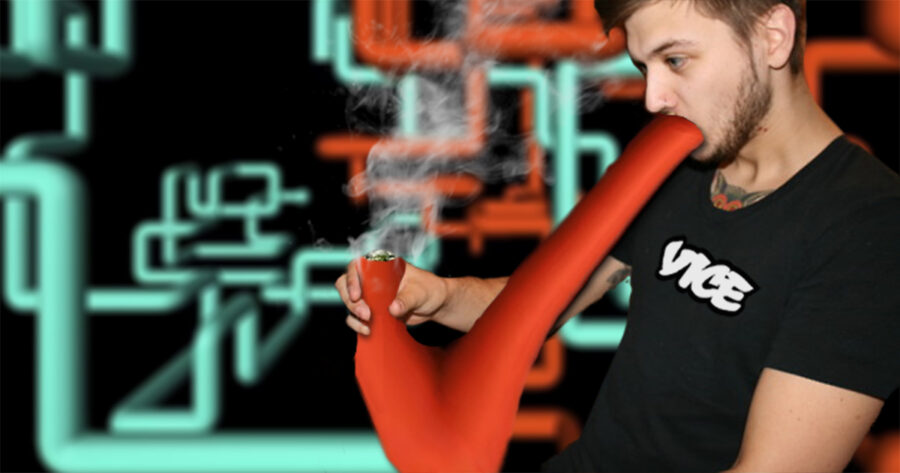 BROOKLYN, N.Y. — Reportedly running out of ideas, tech journalist Ben Henrik published an in-depth guide on how to make the pipes screensaver from a computer running Windows 95 into a totally gnarly bong.

Henrik made the “dank-ass” smoking device out of the classic procedural animation for the Vice-brand gaming publication Waypoint.

“The bong grows at a constant rate and resets every few seconds,” 35-year-old Henrik writes, “It’s very trippy and cost more than Vice paid me for this article.”

“I’m a real-as-shit tech reporter,” explained Henrik, who once had to beg his family to let him major in English at a private university.

Read More From Hard Drive: Guy Who Can Tell Difference Between 60 and 100 FPS Lies About Other Stuff Too

The report includes a photo of Action Bronson getting completely demolished off of a sativa-dominant strain called Bill Gates Sour Diesel. The colorful, self-generating bong in question can be seen with edges that are geometrically impossible in the real world, which help provide “smooth hauls of that good shit.”

The pipes screensaver came standard with Windows software to prevent static images from imprinting onto monitor screens, and it was discontinued with the release of Windows Vista or as the Henrik referred to it in his article, “More like Windows BITCH-sta!”

Henrik’s last assignment for Waypoint was titled “I Took Mushrooms to See if They Make You into Big Mario like in Super Mario,” marking a trend in drug-related tech articles for the self-described “writing-artist.”

“The possibilities with Microsoft applications are endless,” Henrik says, “Imagine, like, huffing solvents in MS Paint.”

During a follow-up Twitch stream addressing the Waypoint article, Henrik demonstrated how blue mana potions from Diablo II can be fermented into “a fucking insane hallucinogen comparable to DMT.”