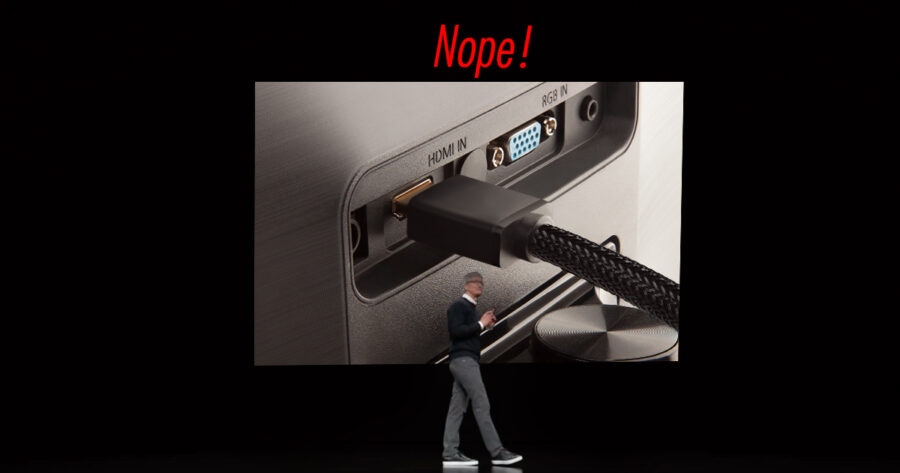 CUPERTINO, Calif. — Apple announced their long-awaited new streaming service Apple TV+ during a keynote address at the company’s headquarters this morning, introducing a slate of upcoming shows, innovative streaming features, and a bold new way to forcibly remove every HDMI port from your television whether you like it or not.

“Our tech guys were just hungry to take out more connector ports after killing the headphone jack and nearly every port on the Macbook. HDMI seemed like the perfect choice,” said Apple CEO Tim Cook during the event. “It’s been around, what, like 15 years? It’s old hat. There’s no room within our Applesphere for something like that.”

In response to initial confusion over how the company planned to remove such essential ports from all televisions worldwide, Cook promised a “simple” and “elegant” solution.

“You’ll have two distinct options to make your television compatible with Apple TV+,” said Cook in a later statement. “You can schedule an appointment for an Apple Genius employee to come to your home and destroy the HDMI ports, or you can order a Do-It-Yourself Port Removal Kit, which comes with everything you need to fill the HDMI ports with hot tar all by yourself. As long as those things have been utterly annihilated, we’re happy.”

Apple has yet to announce their method for streaming without the ports, but the company indicates that it will be wireless and cost no more than the price of six HDMI cables.