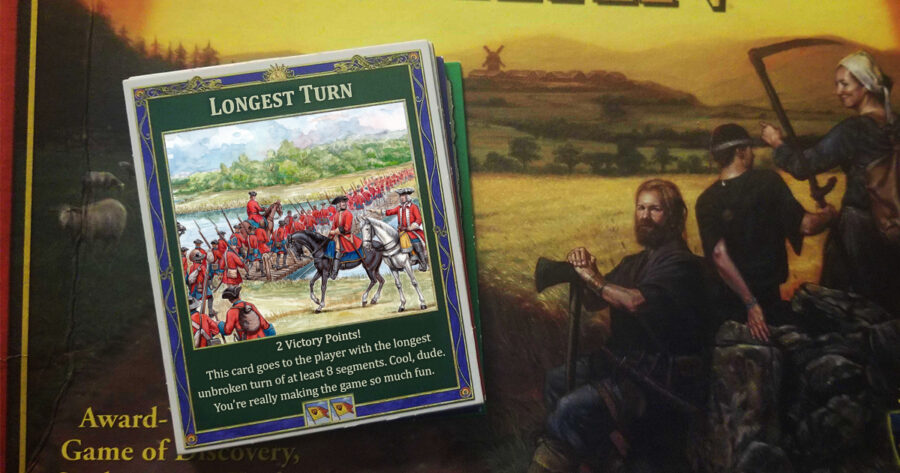 BALTIMORE — After collecting seven resources off the roll, trading with two other players, then using twelve resources and a development card to establish four roads and a city, local Settlers of Catan player Marcus Zhang officially won the popular board game’s passive-aggressive “Longest Turn” special card earlier this evening.

“Oh, that’s the longest turn? I didn’t even realize! Don’t mind if I do,” announced Zhang, as he plucked the vaguely insulting card out of the box at the conclusion of what felt like hours of strategic game mechanics. “It doesn’t give me any special abilities or resource multipliers, and it seems like this card was explicitly created to make me feel bad. But guess what? I feel great.”

According to the Settlers of Catan Game Rules & Almanac, the Longest Turn card is reserved for a smug player who saves up all their resources over a dozen turns, only to exhaust nearly all of them in an unnecessarily showy finishing move.

“If you are the first player to make more than eight moves in a single turn, you take this Special Card,” says the manual, “and wave it around at everyone else playing. Go ahead, brag about it. No, really, you earned it. Congratulations. This card is worth zero victory points. Dick.”

With the Longest Turn card officially on the table, other players were left speculating if any one of them could surpass Zhang’s mammoth set of moves and claim the card for themselves.

“I’ve been planning for a couple settlements, just wait until I get to roll,” said Catan competitor Kylie Joseph, before immediately rolling seven and emptying half her hand. “Damnit.”

Sources report that after his excruciatingly drawn-out move, Zhang was positioned to win the game and could even pick up the Largest Ego special card along the way.