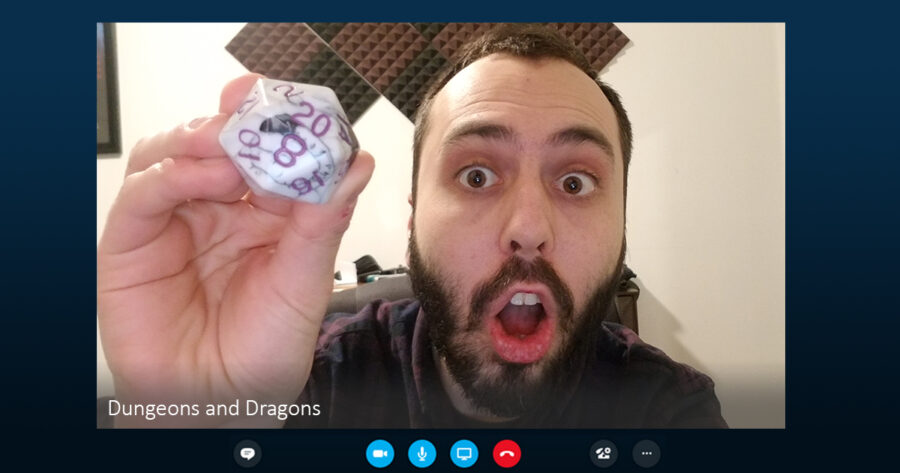 LAKE GENEVA, Wisc. — The tenth session of a small Dungeons & Dragons game took a turn when Greg Atkinson, the only player skyping-in, had incredibly rolled seven natural 20s in a row, according to close sources.

The other players in the group, known as the “Indomitable Fore,” were visibly awestruck as Atkinson rolled to pick a lock, checked the die offscreen, and revealed yet another natural 20.

Pete Myers, the group’s satyr bard, struggled to put the amazing feat into words. “There has to be a reasonable explanation. Maybe something weird’s going on with the gravitational waves where Greg lives,” Myers told reporters. “Or it could be irregular atmospheric pressure messing with the weight of his dice. All I know is Greg was never been this lucky before he moved away to Dallas.”

While Atkinson’s unbelievable luck has thrilled Myers and the other player characters, the Indomitable Fore’s dungeon master Jackie Sigh has been struggling to make it work.

“My campaign is fucked now,” said Singh. “I planned for a few lucky rolls — that’s part of the fun — but this is crazy. Greg’s fourth straight natural 20 was during a boss fight I’d spent all week planning. Before we even rolled initiative, he persuaded my legendary mind-flayer, Ron Calamari, into jumping off a cliff. Boom. Dead. Later, he got another on his seduction roll toward an ancient black dragon I used as a distraction while I caught up. He must be getting tutored by some dice rolling master in Texas.”

UPDATE: The group was at a loss for words at their next play session when Myers, skyping in due to visiting his brother in Minnesota, began matching Atkinson’s natural 20s.