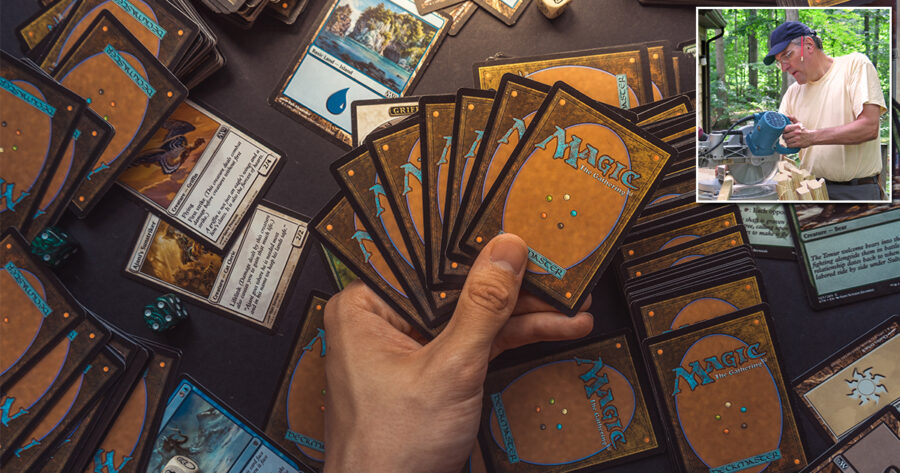 INVERNESS, Colo. —  Feelings of pride and unity briefly filled the home of the Grantham family yesterday, following a misunderstanding about what 15 year-old Marc meant when he said he was getting into “deck building.”

“To be honest, I was kind of surprised how excited my dad got when I told him,” the young Grantham told reporters. “Then I brought out the Magic: the Gathering 4th Edition Starter Deck I had just bought and, well, his smile faded pretty quickly.”

Sources familiar with the family say that Richard Grantham had been hoping that his son might find a more masculine hobby after driving his son to Jo-Ann Fabric earlier this year to purchase Vinyl for his My Hero Academia cosplay. He reportedly believed that carpentry was a step in the right direction.

“I bought a fully-loaded toolbox for him when he was seven,” reported the elder Grantham, while drinking in the garage. “I thought he was finally over all this nerdy crap. And then the kid pulls out these cards with elves all over them. Jesus christ. I thought we were gonna work on a project together!”

The father and son have struggled to connect over the course of Marc’s life, although not for a lack of trying. Sources confirm that Marc once attempted camping with his father, lasting roughly five hours before being overcome with an anxiety induced asthma attack. Richard also once watched two-thirds of Harry Potter and the Goblet of Fire before falling asleep.

“I was also a little surprised by Marc’s new hobby,” Cynthia Grantham said. “Richard has been talking about building a deck onto our cabin on Ramona Lake, but Marc’s never even been there because it doesn’t have a HEPA filter and his paralyzing fear of deer.”

Sources say that the family is headed for another drastic misunderstanding, as Richard recently got excited about the possibility of a father and son hunting trip after overhearing Marc discussing rifles used in Red Dead Redemption 2.