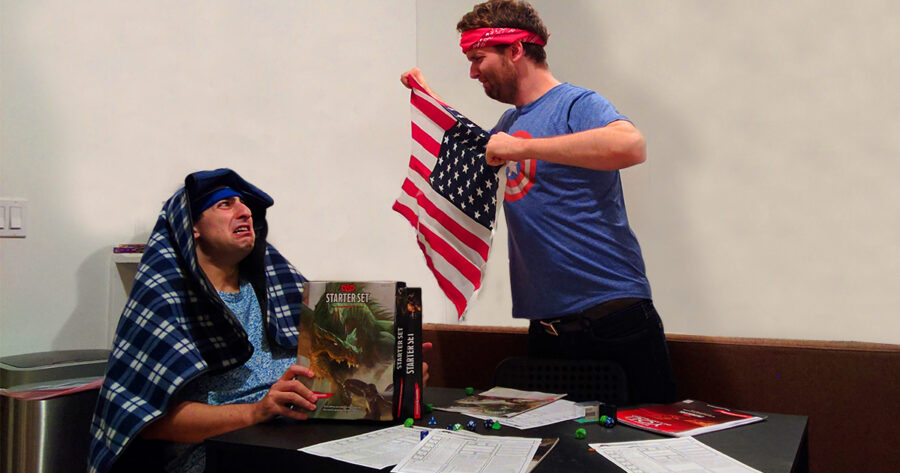 DECATUR, Ga. — A local Dungeons & Dragons collective has ousted their overreaching despot today, in what is being reported as a populist coup.  In the leader’s place, the group has set up an egalitarian democracy based on a majority vote of all players.

“This is a proud day for Atlanta area roleplaying and pen-and-paper RPGs in general,” stated member David Green [Level 2 Paladin Necros Qwerty] in an Facebook statement. “No longer will we be shackled to the whim and fancy of some power hungry Orwellian dictator behind a dungeon guide. Now the players control their own fate.”

The first module attempted under the liberal regime was Queen of the Spiders and before the campaign left Erelhei-Cinlu, cracks in the political structure began to show. While attempting to take on two thugs the clan couldn’t agree on particular fighting parameters and in the end the thugs were beaten to death with their own jawbones.

“This is nothing but a multilateral kakistocracy,” complained dethroned DM Anthony Ferrel. “All of their character sheets were over-bloated and self-serving but they couldn’t get anything done. Anything anyone wants to do, they do.  It isn’t democracy, it’s anarchy! God help them if they ever face the The Spider Ship Of Lolth.”

According to Ferrel, Gregory McCarthy [Level 3 Cleric Tarles Roughstone] was allowed to cast Ethereal Jaunt even though that is for Level 7 Clerics. Soon, that led to Mary Penney [Level 2 Ranger Crispin Autoharp] casting Glitterdust which is meant only for Wizards. Frost Giants were tickled, a sinkhole was plugged with pudding, and prostitution was legalized.

The campaign admits, after almost freezing to death in the Ice Caverns, that new democracies often need time to find their feet.

“It all went sort of downhill when everyone declared they are now level infinity,” said Sarah Mencel, an all-powerful warlord who began only a weeks ago as a level 2 warlock half-elf. “Jerry started declaring that he was doing things and then immediately deciding that he succeeded. Dice became a thing of the past.”

After the mission failed in Queen Frupy’s Chamber there have been rumors of a potential power grab by Francis Harper [Level ∞ Bard Aster Ferrerrer] and declaring himself Dungeon Czar.